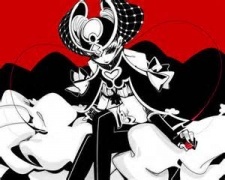 Romario3210 Dec 20, 2015 1:33 PM
A subtle and well done bildungsroman. My fave Kyoani work, what made the show for me was the little moments with the characters, its ambiance, the gorgeous backgrounds, recurring imagery/visual callbacks, subtle exposition via interactions and shot composition and of course the direction in general. Second half in particular was really great and I liked how the mysteries served the characters and not the other way around. The show handled both its subdued and climatic moments really well for the most part. I still found it jarring at times how seriously the characters took these trivial conflicts/situations but oh well.

Lately I've really gained a bigger appreciation for the visual elements and form behind a work. Not even sure what I would have thought about this show beforehand. It's why re-watching Eva and Lain were such a treat for me.

Romario3210 May 8, 2015 7:14 AM
Something I've been thinking about is Dante's influence on Tarkovsky and I've noticed some similarities between their autobiographical works in Mirror and Divine Comedy. The woods as a motif in the film is heavily contrasted with the open fields where characters are seen walking away from the camera. The woods are a metaphor for obscurity in Dante's poem but they take on a literal meaning in Tarkovsky's work as the very nature of narrative becomes completely obscured as the scenes with the woman at a younger age pregnant and at a much older age with her children are intertwined. Yeah okay this comment was a bit less substantial than I expected but oh well. Have you seen any other Tarkovsky works? I would especially recommend Stalker and Andrei Rublev. If you really want to know more about his ideas behind cinema, I'd recommend reading his book, "Sculpting in Time". I've only read a bit of it, it can be a bit needlessly wordy, redundant, dogmatic and contradictory even, but I think it's a must read for any Tarkovsky fan.

Wild Strawberries is probably my favourite Bergman film. His filmography is just so large and amazing. Everything I've seen from him has been great.

I love Time of the Gypsies, I seem to be attracted to coming of age stories that explore exploitation, victim-blaming with a surreal touch (see Utena). Thanks for the recommendation, I also want to watch Underground from him.

As I mentioned to Excelsior, I'm not that big on Lilpri but it's only been like 5 episodes so I'll hold of from any real criticism.

escapeplan Apr 21, 2015 6:50 PM
i think its actually a team of 2 or 3 writers, but even then they seem to have made lots of popular titles, right now im watching one of their shows, Jungle wa Itsumo Hare nochi Guu, which has very good comedic timing. they seem like top notch

escapeplan Apr 20, 2015 7:55 PM
hey, i wanted to ask, you are always on the lookout for good directors/writers right?

Tasteless-casual Apr 4, 2015 10:53 AM
No problem at all Sir Lancelot . you are welcome anytime to talk about it . I'm not sure how to begin discussing this anime but if you have interesting idea about it , I'm interested to read it.
All Comments