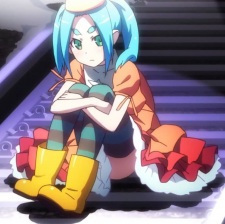 I've heard of Lucky Star and Seitokai no Ichizon before, but hadn't really considered watching them that much; but if you say they go well with Haruhi/Clannad/etc. I'll check them out when I'm up for something fun! Oh and you seem to be right about Sayonara Zetsubou Sensei with the voice actors and the Shaft style. Together with Paniponi it looks like those are some more Shaft secret tips :P

I liked your favorites list a lot (although you've watched quite a lot more stuff than I have). Saekano was only recently recommended to me to by a friend. Its "ecchi/harem" combination kept me distanced from it for quite a while, making be think it was a rather low quality/no story series, but how wrong I was. If you enjoy romcoms and don't mind them not being too "deep", I think you might enjoy it. The first season was pretty focussed on comedy (many 4th wall breaks, snarky dialogues and otaku jokes), the second season had more drama (centered on the whole game development theme) and the movie was a really great finale and conclusion to the romance/story in my opinion!

Ah by the way, I also saw you hadn't finished Kill la Kill yet (but I liked that you apparently watched the first half twice). I would really recommend you finish it - the absolute insanity of the story takes off even more in the second half! It was one of the first anime I watched and up till now it still holds a special spot for me for just being as crazy as it is: great characters and crazy story, both with more to them than appears, amazing soundtrack by Hiroyuki Sawano and the unique Trigger art style and character designs.

And well, while I'm at Kill la Kill, I also noticed you haven't finished Gurren Lagann yet. I only recently finished it up and in retrospect (after watching Kill la Kill), I really noticed the parallels - it's pretty much "Drill la Drill" :P The reason I'm talking about Gurren Lagann now is because Saekano had a nice Gurren Lagann reference in the second season (if I remember correctly), and also because I wanted to recommend the recent movie from Trigger ("Promare"), which is one 1h50min reference to Trigger's previous works (I'd say mainly Kill la Kill and Gurren Lagann), with many of KLK's voice actors, art style and Gurren Lagann's "characters" and story direction! :)

I enjoyed Kokoro Connect quite a bit, I liked the premise and variety it had a bit more than Kiznaiver's, although I also like Kiznaiver for its Trigger theme. Be sure to let me know what you think about it, and well, the other things I wrote about here as well, if you come to watch them ;) I'd be glad to hear your thoughts!

inim Sep 14, 1:10 AM
So you got the balls to hand out a 9/10, I'll have to think about upgrading. It's definitely one of the anime which made me think most, it probably deserves promiotion. My current compromise was to rate the specials wit a 9.

If you are going to explore the horror genre (one of my favorites and first badge I maxed on anime.plus) here some recoms. Haven't checked if you watched them, and all are of "gem" type i.e. I left out very mainstream ones.

https://myanimelist.net/anime/258/Hitsuji_no_Uta
Same mangaka as Sing Yesterday for Me, and another very realistic and sobering take on vampires. Plus some vampincest.

https://myanimelist.net/anime/2596/Shinreigari
Not vampires, but also small town mystery. A little too heady and info dump oriented, still good and unusual.

https://myanimelist.net/anime/326/Petshop_of_Horrors
Episodic, josei version of tales from the crypt. Too short.

https://myanimelist.net/anime/10417/Gyo
Ufotable. I really don't like this body horror b-movie, but it's probably good to watch it "for completeness".

inim Sep 11, 8:16 PM
First I had rated it a bit lower, but over the following weeks it kept growing on me. There are some fairly objective problems. For one, there is no MC in the huge ensemble cast. The doctor comes closest, but there isn't a single likable character. The art is so-la-la. Buildup is really slow and meandering, with some moments of drag. I personally find the villagers a bit slow to unravel a secret that isn't that hard to solve. But the last handful of episodes (including the specials) hit with fire and fury. This show knows it's ending is fantastic and decides to diligently build it up for maximum effect.

As for best horror, definitely in the top 5. I rated Higurashi and Mononoke higher, but the latter is special because of it's unique art. Technically also Monster, Perfect Blue and Berserk (1997) but those don't feel like "classic horror". Thematically Shiki is absolutely unique, even when compared to live action movies.

inim Sep 11, 7:11 PM
Make sure to watch the Shiki special episodes, episode 20.5 is one of the best nihilistic horror moments in all anime.

BerdThAnimated Aug 31, 12:51 PM
Finally another person that thinks Oikura is a great character!!

inim Jul 13, 8:50 AM
Thank you a lot, that one flew under my radar, despite myself being both a Shinbouista and NISIOISIN fanboy. Added to PTW, looks very promising.
All Comments