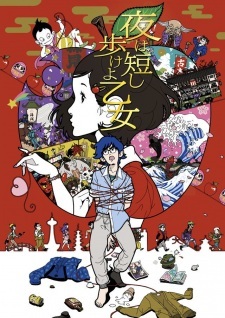 LuckyAlix Dec 2, 2015 3:34 AM
Hello fellow MAL member! :D
Are you a movie addict or maybe just a casual movie viewer? If films, animated or live-action ones are something you like, have you ever wondered about joining a club where you can discuss about your favorite movies with your friends on MAL?

Fintan Sep 28, 2015 6:36 AM
It's pretty popular now, Asano is getting more attention. When I started Punpun very few people were reading it on MAL, now it's one of the top 5 manga I think.

StyleF1re Jan 7, 2014 1:49 PM
Things aren't locked in yet and probably won't be until the final week(s) of the month. I feel like dropping more anime than usual. I already pitched two series 5 min into their respective first episodes (Witch Craft Works and D-Frag!) and decided against starting another (Robot Girls Z). Deleted those three from my list, and there's another five in danger of being dropped soon. I no longer care for trivial things like "sucking it up" and completion percentage. All in all, this could be the first time in awhile that I'm watching ten or fewer airings throughout a season.

Who knows? Maybe less is more?