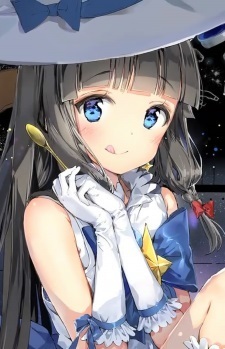 DoodlebugFour Jan 18, 6:57 PM
When an manga about a former Yakuza enforcer turned House Husband gets a live action adaption with Kenjiro Tsuda as the lead. lol https://youtu.be/ktztBx-8onk

I hope this S***post can qualify as a Birthday Gift. lol https://youtu.be/vYX_Rp3isLU

Also Spriggan is getting an anime adaptation on Netflix by David Productions. Created by Ryoji Minagawa, the same author that did Project ARMS. Expect alot of Scifi Action and Crazy Plot Twists.

My internship is a long story I'd rather not talk about anymore. Some stuff happened, let's keep it at that.

I see where you are coming from. I can't blame them for pandering a bit to the fans with the Riko Yoshiko stuff. Nothing better then to have your ship be canon. (Rip Tatara x Mako from Welcome to the Ballroom). Well I firgured I couldn't let you down yet again so I actually watched the movie this time! It was pretty enjoyable and a good end to the story. I'm excited to see what thet will do for that Sunshine movie. It was going to take place in Rome I'm pretty sure. Alright I see, Not gonna waste my time on that then. I'd much rather watch One Piece.

Damn that sucks, hope you'll still enjoy it though.

Oh I have the app for you! It might not be the fanciest or easiest to learn but it works. It's called "SeriesGuide" I've used it for a couple months and it serves me well. You could also look for different apps that sync with a Trakt.tv account.

Yup, it's still undecided. I guess it depends on how long you are willing to wait for a continuation of the story.

I'm actually not sure why I stopped watching 3-gatsu. I guess I just didn't feel like watching it at the time. One Piece did consume me again a little while ago.

Oh, Yuru Camp was just the best! That's understandable. It's a lot of the same thing with just different candies. I actually stopped watching Takunomi because I fell quite far behind on seasonal stuff and wanted to catch up. Maybe I'll start it again some day. Glad you enjoyed it :)

I'm not sure what it is but I'm just kind of dissappointed with 0. I hope that the VN portrays the story better. Yeah it was really unfortunate that Kou was introduced so late. I would really like to see more of Kou in a second season. But they probably won't make that so I'll have to resort to the manga I guess. Amanchu S2 was pretty fun, if you enjoyed the first season and have some time I'd recommend you watch it. Hinamatsuri was pretty funny, but I would have loved to see a better ending for it. I actually ended up watching Tadakoi as well later on. I would've loved it if they actually did something more with all of those couples. I've heard good stuff about Comic Girls, I just don't have the time to watch it. I might have to pick Uma Musume up later then, I kept seeing cute gifs but didn't have the time back then. I watched 2 episodes of Kiznaiver I think. Glad you enjoyed it though.

I'm watching Grand Blue as well, It's actually pretty good. You should 100% watch Hataraku Saibou. It has such a unique premise. I'm also watching Asobi Asobase but I'm not sure if I'm going to continue that just yet. I'm also watching Chio-chan no Tsuugakuro together with a friend. I guess this is the closest to Hinamatsuri you'll get this season.

Well I do come here from time to time to update my list and create an export seeing how Anilist doesn't have that feature just yet. Although they do say they are working on it. At that point I won't really have a use for my MAL account I guess. Except for writing comments. I'll make sure to follow you on Anilist.

We can just continue writing these big comments on MAL though :). But feel free to shoot me a quick message on Anilist every now and then asking for what I'm going to watch next season or something.

DoodlebugFour Apr 16, 2018 6:00 PM
And Hatano was in the Horror BL Visual Novel "Sweet Pool" as the main character, who has a parasite in him that makes him crap meat monsters. XD
https://youtu.be/aai-UPVs0B4

DoodlebugFour Apr 15, 2018 2:32 PM
Since you became a Wataru Hatano fan, did you know he voiced Rufus from Street Fighter 4 in japanese? XD

Well let me give you an advice.
Just for your information.

The first Episodes and following few Episodes can be quite average.
I know that it can be for many people, so maybe for you as well.

Gebruikersnaam Mar 10, 2018 3:51 AM
Sorry for my late reply as well. I've been very busy with my internship. And I may or may not have been a little bit obsessed with a game called Warframe.

Yeah, watching too much seasonal stuff does that ;/. I've been meaning to continue watching one piece for a long time but I keep playing catch-up with the seasonal shows I picked up first. Well, I haven't had that urge just yet, the time I used to use to watch anime has been taken by Warframe, which I currently have 545 hours of play time on. Oooohh, another monogatari. Maybe I should start watching that series again. They'll probably milk it to death though, it's a business that wants to make money. But I can only hope they don't milk it so much. Yeah, as long as the quality doesn't drop I guess it'd be alright.

I actually ended up skipping Two Car as well. I skipped it so I had more time to watch other shows, but perhaps I'll pick it back up someday. What annoyed you in Sunshine S2? I thought it was pretty good. I'm sorry but I only see Nico as an annoying side-character, please don't hit me. Hmm, I guess those would all be valid reasons to dislike Honoka. I haven't seen the movie yet, to be honest I totally forgot about it ;p. Alright, here are my Aqours rankings: You - Kanan - Riko - Maru - Yoshiko - Dia - Mari - Ruby - Chika. I had to put You up at the top because every time I see her she manages to put a smile on my face, and she got some good fan art as well. Well, talking about dropping shows early on, I dropped Violet Evergarden. Maybe I hyped myself up for it too much, maybe I expected something else from the show. But mainly, I just dislike how Violet acts. Maybe it got better later on, but from what I've seen it just seemed like a well animated pile of nothing.

Nah, I haven't watched it. And I don't really feel like watching it at the moment.

Did you watch the rest of the show, if so what are your thoughts on it?

Have you perhaps watched more of Avatar already? I kinda feel like starting a rewatch of it. But I'll have to weigh it against watching more one piece which is a tough battle to fight.

They actually confirmed a season 2 for MiA, I'm not sure when it'll be released but I think it's not too far away.

I haven't watched it yet. As you may have noticed I haven't watched almost any anime since when we last conversed. Have you watched more of 3-gatsu S2? I kinda stopped watching after a couple of episodes, did it get better? Nooooo, R.I.P. ship! That's just the worst, knowing your ship will sink can take so much enjoyment away from watching the show.

Well, it's a bit late for me to recommend Winter shows. But I don't care. I'm enjoying Yuru Camp a whole lot. I'm still trying to start Dagashi Kashi 2 which I'm kind of excited for, but I need to finish season 1 first. Oh, and Takunomi is something I picked up, I haven't watched it in a while so I can't really recommend it or recommend against it.

How about you, have you found anything interesting for Spring 2018?

Sorry if this comment seems a bit short, I skipped a couple topics in the hope to shorten the comment down so we could start writing each other more often ;).

Kou_Keiki Jan 21, 2018 9:54 PM
Turning 18 is a huge milestone haha so I hope you celebrated it well :). Same here, I've been rewatching a couple of anime past few weeks. Well over half of anime I've watched were during end of 2014/start of 2015. During that time I used to binge watch 10 hrs+ of anime a day every day so recently I've been slowly rewatching some that I rushed through. I was thinking about signing up for the anime challenge too but chickened out :3. Last few months of last year I got really into Love Live! anime and even started playing SIF. I ended up getting too attached to the cards and started burning through my savings to scout so I had to quit after playing it for two months :(. It was a really fun rhythm game though! If I recall correctly you used to play SIF too right?

Last few weeks I've been watching anime from last two seasons, such as Shokugeki S3, Houseki no Kuni, Shoujo Shuumatsu Ryokou, Sakurada Reset, and Just Because! They were all pretty enjoyable to watch. I haven't really watched this season's anime yet, but I did start watching Sora Yori Mo Tooi Basho and found it pretty funny haha. I am looking forward to Violet Evergarden but I want to wait until it's finished airing. I'll check out Yuru Camp soon!

I'm getting a little busy again because I'm moving to a new city soon. Currently I'm trying to find a job and find a place to live in the new city. My JLPT score is coming out in less than two days! I hope I passed the test haha. Have you done anything fun recently?

I'm sorry for ending our conversation abruptly last year >_<. I got really busy after my last quarter of university started and was not able to reply. My last few months have been very productive though! I just started picking up the pace of watching anime again this month. How have you been recently? What anime did you watch recently and is there any anime that stands out to you this season?
All Comments