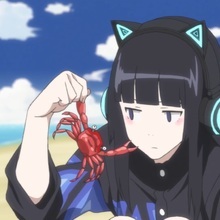 
I step up on the ground.
The wind's died down.
There's about thirty meters to the black giant.
It'll take him less than three seconds to close this distance.
--------- Therefore.
The outcome of this battle will be decided in the next three seconds.

My mind's clear.
I know the scope of my power.
Projection using creation concept, basic structure, composition, production technique, growth experience, and, accumulated years.
A Reality Marble that inverts the world engraved on your soul, the enbodiment of the mental world using theory of magic, the world egg.
Inheritance of battle technique, experience, and physical strenght from Archer. Correction. Failed to read physical strenght. I'll still be killed in one blow.
Reality Marble, ''Unlimited Blade Works'', isn't usable.
Archer's world and mine are different. I can't reproduce it.
I can only reproduce what Emiya Shirou has learned, or the Noble Phantasms that he has recorded.
If i'm to use a noble phantasm from my left arm, I have to search within "Unlimited Blade Works" for the Noble Phantasm best suited for this situation and reproduce it.
But be warned.
Projection is a two-edged sword.
If you use it once, it will---------------

(BERSERK NOISES)
He notices me.
His hostility now has a focus.
Recognizing my use of magic as a threat, his eyes move.
They're like ominous stars.
The giant gives a death cry and runs to kill his enemy.
--------Mad Warrior.
The giant is insane, but still the same.
He's Still fighting his battle against Saber.
He is blind and insane, his life has ended twice over, and his body is rotting. but he's still fighting to protect Ilya.

He's right before me. His massive sword is upraised.

He steps forward, and I confront him by also stepping forward.