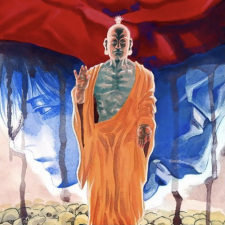 keragamming 4 hours ago
Not for me, after certain time I reevaluate the series and if I feel I'm not enjoying it no more I reduce the score.

edit: wow you are just at chapter 159? You are still in the peak time of the series, you may understand my opinion more when you reach a bit more further in the story.

keragamming Yesterday, 10:35 PM
I tend to read over the last 3 chapters if I haven't read a particular manga series in a while, that way I remember exactly what is going on.

Another series that was once in my favorite list and was rated a 10/10. It too has lost its spark imo and now it feels like any other typical fantasy manga. It has become a lot less dark with Guts and his Harem squad/friends going on an adventure.

I feel the manga has long past its peak and it should have ended a long time ago, plus the beaks are not helping.

keragamming Yesterday, 10:05 PM
lol majority of them I haven't even read in years! It is just that I am less likely to drop a manga simple because I can read them at my own pace and it doesn't take much time to read most of them. Unlike a anime that I have to sit through 23 minutes of it, anime are more likely to get dropped by me.

keragamming Yesterday, 9:52 PM
Keep in mind dragon ball ratings are from when I was kid not even a teenager at the time, I also watch death note when I just started watching anime. So yeah you can call is bias, this is when I was still new to anime.

So those ratings were in my early time, so keep that in mind, as you can see I have become a lot more critical with the newer anime series. So you might notice that the older series are rated better than the newer ones.

keragamming Yesterday, 9:45 PM
Manga experience and anime experience are totally different, I don't compare them. But yes if I would have to choose between the two I would choose the mha anime over the hxh manga, simple because mha has soundtrack and all the advantages a anime has over a manga.

I have read a good amount of the hxh manga, I know the chimera ant arc is one of the most loved arc in hxh but it is the opposite for me, there is not getting around that.

I would recommend you to wait on the anime adaptation, your experience will be better imo.

keragamming Yesterday, 9:14 PM
Nah, I like hxh more than mha. I gave hxh 2011 a 7/10, while mha seasons a 6/10, hxh was even once in my favorite list when I finish Yorknew arc which I consider as one of the best arcs in battle shounen, but it lost its way once it reach the chimera ant arc, didn't like it at all, the arc after that was decent though, but the damage was already done.

The manga is a different can of worm and I just didn't enjoy it at all, plus it was too wordy, I see why the anime use a narrator and that is all because of the amount of dialogue in it. I never read the mha manga because I was never that interested in it to begin with. It was lukewarm to me at best to me.

If you had check my list, you would have realize that I have already watch monster, I gave it a 8/10 and yes the story does drag a bit imo, but it was still a great series overall.

Mairlol Yesterday, 6:00 PM
Well he gets a sexual thrill from fighting strong opponents which is pretty uh unique lmao

kitakevo Yesterday, 5:48 PM
Big fan of Watchmen too! I see that you are into cinema, here's my filmaffinity profile. https://www.filmaffinity.com/us/userratings.php?user_id=884951
I recommend you Delicatessen and Funny Games (1997) if you haven't watched them, two of my favourites films. And seeing that you liked 12 Angry Men you should watch Witness for the Prosecution (1957), it has one of the most mindblowing endings ever. Cheers!

Mairlol Yesterday, 5:33 PM
I do really like part 7's characters just not my all time favourite. Um probably Funny Valentine, Gyro, Johnny, Gappy(part 8MC) and Jobin. Basically just part7/8 characters. For HxH Chrollo, Meruem, Pariston, Shaiapouf and Hisoka. I think the prince Tserriednich has a lot of potential to be a great villain whenever that day will come lmao.

Mairlol Yesterday, 5:20 PM
Nah you will end up loving Funny Valentine later on. The part where your at its mainly Gyro's time to shine from what i remember.

Mairlol Yesterday, 4:44 PM
The president is Funny Valentine. He starts off kinda fat and he turns skinny later, im guessing Araki changed his mind with his design later LMAO its pretty funny.

Mairlol Yesterday, 2:11 PM
It would be cool to see color in Berserk but really not necessary. Yeah it gets better as it goes on. I started to really enjoy it when Funny Valentine gets involved more.

Mairlol Yesterday, 1:54 PM
Color is a must. Yeah Gyro and Johnny have really good development and the race is always pretty entertaining with a lot of other stuff going on
All Comments