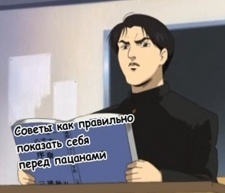 PeripheralVision Apr 7, 2015 5:24 AM
Yes, but NGNL is bankrupt of entertainment value beyond the cheap fanservice ladled out like soup to homeless people. The humor was dull, the plot and results beyond predictable, the characters genuinely uninteresting as human beings.

jjpak119 Mar 24, 2013 1:21 AM
Hey there! I'm gonna make this quick because I want to go back to watching but I loved your review on Suzuka! This anime brings back reasons why I started getting into drama/romance/slice of life; it's such a perfect anime for me! Anyways, talk to you more later!

Pyapi Sep 2, 2012 9:34 PM
I'm taking a Japanese course, so sadly ignoring kanji isn't an option. The grammar, though, is a lot less complicated than what I pictured at least. My biggest difficulty is the reading and writing, mostly due to the kanji. Of course, vocabulary is a problem too but that can be fixed with a little more studying :)

I can imagine how difficult it was! Everyone I know that studied Latin say they had a difficult time, although all of them agreed that it payed off later on. Especially with all the Latin-rooted languages there are

Brazilian Soup Operas manage to find you, even if you run! I usually watched them because my dinner time was during the Soup Opera Slot on the TV (At least when I lived in Brazil) and we always watched it while eating. Not a huge fan though. Although, now that I'm in Mexico, I see how good they were. Well, at least compared to the Mexican Soup Operas

I know what you mean about on-going series! I've given up on keeping track of those. I just read completed series now. I'm too impatient, I guess, but I like reading series at my pace not at the publishing's pace.

Hmmm, you want a recommendation... What type of manga are you looking for right now? I know you told me you liked Josei and the one I've liked best so far, which I noticed you haven't read yet, is Kimi wa Pet. I personally liked it and suggest at least taking a little peak ^^

Pyapi Sep 1, 2012 7:59 AM
I've been learning Japanese too! But... Kanji is too hard haha. I technically know tons, but I always get lost with all the different readings, meanings, and how to write them. How do the japanese kids do it? ;O;

I've always found Latin so interesting! It shouldn't even be that hard since I know two Latin-rooted languages and all, but all Latin-based languages I've seen so far have so many complicated grammar rules and so many verb tenses I tend to avoid them, including Latin...

That's true! I wouldn't want to eradicate all cliches, we do need them for parody and comedy anime. But seeing the same cliche too often does get annoying. That's why I try picking drastically different series to read all the time; that way I don't just see a few cliches but a huge variety of them and don't get too bored/annoyed at seeing them.

Pyapi Aug 31, 2012 1:09 PM
I'm still only discovering josei, but so far I'm liking it very much. I liked reading a little bit of everything though, it all depends on my mood. Sometimes I feel like some more fighting and simpler plots (Shounen), sometimes something more emotional (shoujo) and sometimes something more mature (Josei). That way I also avoid seeing each demographic's respective cliches too much in a row. And there are always those exceptions that everyone loves

I prefer watching something with subs, even if I know the language it's in. It's become a habit, I guess. Funny when even though you know the language and can understand everything perfectly, you still read the subs xD

I speak English, Spanish, and Portuguese. Hoping to learn some more though ^^
What about you?