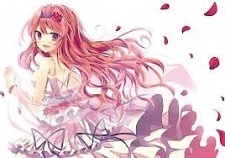 Zahraung May 8, 10:19 PM
Sorry for having told you that your ratings are boring when my ratings are more.

milesrgomez Apr 19, 2021 8:02 PM
You should check out Madoka Rebellion which is a sequel movie to the OG show. You thought the show was decent, so who knows... you might like it.

Marufunk Apr 2, 2021 10:25 AM
Hi there, just wanted to ask something since you seemed to watched hella a lot of the dot hacks series. Do you need to play the games in order to watch the series? I'm trying to get into the series

Zak77 Feb 8, 2021 1:40 AM
Glad to hear that. People don’t understand that a person is entitled to his opinion, no matter how shit it is. Without a fair argument, you can’t say a person has “bad taste”.

Okonomiyaki-Tan Aug 27, 2020 9:26 AM
Hello there! It's always good to see someone with Texhnolyze in their favourites.

I see you are a big enthusiast of World Masterpiece Theater and Dezaki's direction, the only thing I saw from Dezaki was Versailles no Bara, and it was so long ago that I didn't even put it on my list. I'm currently watching the 70s' Ashita no Joe anime and liking it immensely, so if you have any recommendations about where to commence with WMT and Dezai, I'd be amused to read.

I saw in your bio that you admire Fernando Pessoa, that's excellent to read! It's considerably unusual to see people outside the Lusofonia that are interested in Portuguese literature.

Yep, indeed, we haven't spoken in a while, I even saw your message at the Club and wanted to answer but, uh, lazy me as usual. I'm fine here, though things are still rough in Spain. But I'm lucky because nobody around me has been infected and neither have I :). How are things going out there?

Thanks for your words about my approach, very kind but totally not true gkfjgkfjkg. I'll tell you my favorites:

-Shoujo Shuumatsu Ryokou (2017): a very unique iyashikei, set in a post-apocalyptic world set to extinction. Reflective, sad and hopeless, but it ultimately comes off as life-affirming, like a sort of catharsis through the little pleasures in life the main characters still find. It's really beautiful and I like it about as much as the above one, through even as part of the same genre/type it aims for a different kind of relaxation, one that is more layered and complicated, and one that has made me smile and cry for real equally.

-Koe no Katachi (2016): this one speaks to me personally, not just in themes but in attitudes and thought processes. It bugs me a lot when people call these characters unrealistic because I recognize myself in a lot of their aspects. Amazing either way in presentation, narrative and particularly in visual execution, body language in special.

-Kaguya-sama wa kokurasetai: Tensai-tachi no Renai Zunousen (2019): one of the best romcoms for sure. The adaptation is full of energy and relies a lot on an excellent visual execution of the jokes. It's hilarious and the characters are lovable dorks.

-Given (2019): a damn great BL story about overcoming loss and guilt. Intimistic romance and drama written with a lot of care and sense. It's something I admire a lot about the original author of this show. She is very eloquent when talking about, handling and confronting feelings, without any of the artificial dramatic escalation that makes fiction feel so immature at times. It's amazing how effective it is while remaning grounded and treating its characters with respect.

-Princess Principal (2017): steampunk story about a group of spy girls in Victorian London that I didn't know it was going to be so much of my jam. It's structured in chronologically unordered episodes (each detailing a mission) and the narrative is appropriately playful and intense, the characters are all fun and likeable, and the show has quite strong leftist vibes that I, of course, stan.

I haven't explored previous years enough, and even with 2017 I've watched highlights but not consistently. 2018 is the year I can talk more confidently about, with 2019 I basically stopped watching for the second half.

As for my favorite films from the last decade... uhm, I need to think about it, actually. Checking through my 10/10s there's a lot of the usual suspects in animation, and also some films I absolutely loved at the time but I'm not sure how would they hold up now (Blue is the warmest color being one example). So... I'll bring something once I make up my mind, but in the meanwhile I can recommend some lesser-known greats such as A woman's revenge (Rita Azevedo Gomes), Out-takes from the life of a happy man (Jonas Mekas) or The search for Emak Bakia (Oskar Alegría), the three of them being more or less experimental and unconventional in tone.

I would like you to check out this anime review I have made. Here's the link https://myanimelist.net/reviews.php?id=333079. I would like to know your opinion on the series and what you think of my review. I am open to criticism. If you like the review, clicking the "helpful button" is the best way you can show me your support. Thank you in advance for taking your time in my anime review.