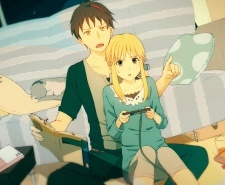 Kirito Jul 10, 2011 3:54 AM
Yeah, I suppose only one volume of each probably isn't enough to make a true comparison of the two series as a whole, but the fact that you even like the manga/characters of Sand Chronicles at all from the first vol is a good sign to me. The characters from Bokura ga Ita have been completely unlikable to me from the outset. I pushed on because I was stupid enough to buy the first 4 vols sight unseen because of the great reviews on this site, but 3 vols in I still don't much like it (learned my lesson not to trust MAL ratings, which I should have known). And your comments on the two came after one of my favorite manga bloggers (David Welsh of the Manga Bookshelf crew) sang the praises of Sand Chronicles, so that little push in the forum was all I really needed to decide to give it a try.

I know what you mean about getting manga from the library. I do most of my manga reading from the library, and even in my library system (which is one of the biggest in the country from what I understand) it can be a pain trying to get certain series, in particular well-liked Out-of-Print manga and newer series. IMO Fruits Basket is well worth owning, but given you're only 1 vol in, the series is 23 vols long, and the series is now OOP with the collapse of Tokyopop, it's quite a risky jump to take buying the series.

Based on your lists I would guess you're much newer to the manga side of the hobby than anime -- how are you liking it so far?

soulflash77 Jul 9, 2011 2:59 AM
Trust me you are going to find something or perhaps that thing ur looking for has been right infront of you all this time and you havent noticed? Youve watched welcome to the nhk everybody has a misaki they just havent found her yet well my life is still hard as balls and right now my only love is internet porn =/ we all have it tough and i know exactly what ur going through the pain the nights ive spent pondering why the days i felt nothing but apathy and living that way is worse than death when u say your going to keep on living it makes me happy yet saddens me at the same time because i think whilst living you should also search for a purpose/person that needs you as much as you need it. After reading catcher in the rye i had that weird misanthropic phase haha its so weird how holden caulfield is actually inside all of us. And finally dont be jealous of me i really am not that fortunate i was just like you and knowing there are thousands of people like you and me without purpose living in apathy despised by their parents for their lack of ambition, makes me feel really bad and it makes me remember the one line of the 2nd ending song of welcome to the nhk where the singer says "if the world is such a small place then why am i so lonely?" their is no real answer. But the one thing that can be learned from the show is that satou would hav had no hope of being assimilated into society or even find a purpose if he didnt do his part, we all need to do our part if we want to break the chains of fate we need to face our greatest fear but its easier said than done. I really hope you do find purpose your not alone If you ever want to talk message me if u ever need anything message me :) "Life is really not as cruel as you take it to be" - Celty Sturlusson from Durarara

Ston3_FreeN7 Jul 8, 2011 8:17 PM
2.0 was pretty good, it's slightly more action focused and I didn't see the point of adding a new character but It still felt like Eva for the most part. For example, it still has the train scenes which were some of my favorite moments of the series though the movie scales back a little bit. I do prefer the TV series, though.

Though Rei is humanized a great deal more, that's probably the most significant improvement in the movie series.

soulflash77 Jul 8, 2011 4:43 AM
hah i sort of feel where ur coming from when u say you want to be a hikkikomori and why u feel that way, i went through a phase similair to that in 2009 where everyone i knew,everyone i met just made me life worse and i spiralled down to a very low point where i secluded myself off from the world and i never went outside i avoided talking to my parents and my grades reached an all time loww. I had thoughts of suicide constantly and not the serious kind but the kind where i pondered what would happen if i leaped onto the road right now and stuff. But after two years of just struggling through i found people that werent full of shit to hang out with i guess im pretty lucky because i found a light at the end of the tunnel i found a goal to work for i gave meaning to my otherwise meaningless life and the best part about choosing to continue living life physically and socially is that u might fall in love and i gotta tell u falling in love can make a mundane boring meaningless life into the most fruitful exuberant experience :) sorry for writing a paragraph

soulflash77 Jul 4, 2011 2:45 AM
i saw ur post on my thread and i can really connect with ur situation and the feeling of apathy that i recieve when i think about my life and how i cant seem to find purpose haha its weird that everyone that has ever thought about life has also really liked welcome to the nhk damn i just hope i never turn out like satou his life what hes going through is something i desperately dont want to face unfortunately as my life goes on i see that im really close to his situation

Kirito Jul 3, 2011 6:55 PM
I was glad to see your post in the guys reading shoujo manga thread. I had been scared off from trying out Sand Chronicles because I'd seen it compared to Bokura ga Ita, but seeing your comments about the two I think I'll try it out once I finish one of the series I'm already in the middle of.

Also, I have to echo insan3soldiern's comments on the Fruits Basket art. There's some flashback sections in the later volumes where she copy/pastes art from the beginning and I was shocked at the difference. Taking a glance at the volumes on my shelf I'd say by V5 there's very visible improvements and about halfway through she really hits her stride. The art style keeps shifting a bit through the rest of the series, but I wouldn't say it gets a lot "better" past the halfway point. The way you can see the characters slowly age throughout the series is truly remarkable, and not something I've noticed in other long-running manga.

If you're in the market for any other shoujo I'd highly recommend Karakuri Odette. It's only 6 volumes, so it's not a huge investment of time (or money if you buy manga), but it's really well crafted and fun. Only possible caveat being that it's not completely scanlated, so if you don't normally buy manga you would have to in order to get the ending.

Ston3_FreeN7 Jun 9, 2011 10:39 AM
Unfortunately, the anime ironically ends around the time the manga REALLY starts to pick up and those last few episodes sort of give you an idea about what Fruits Basket is really like and, yes, the manga handles it much better and differently as well.

I think you'll like how Tohru handles the cat situation better in the manga. And, I looked at the art style in the latter parts of the manga and the most notable thing is how the main trio of Tohru, Yuki, and Kyo look more "mature" later on. Particularly, Tohru. That's probably the biggest difference.

Ston3_FreeN7 Jun 8, 2011 8:48 PM
I noticed your comment about the manga version of Fruits Basket art style, I'll say that it improves a great deal as it goes on. Also, the characters noticeably mature in appearance the further you get in.

Ston3_FreeN7 Jun 2, 2011 5:37 PM
Well, Paradise Kiss was pretty good but there really isn't honestly a whole lot of shoujo/josei series I've seen to be honest and because the website seems to be acting up I can't really look at my list to refresh my memory of what I've seen in the genre. I'll have to get back you on that, though two series I've seen only a bit of and was kind of impressed with was Kare Kano and Boys Over Flowers though these are older series from the 90's.

Incidentally, Kare Kano (His and Her Circumstances) and another series called Gunbuster were both directed by Hideaki Anno so you may want to give them a shot. Gunbuster was his first work and a huge influence on NGE, though the main character is far more likable.

Ston3_FreeN7 May 30, 2011 9:30 PM
Sorry for the random comment, but I see in the forums you are enjoying Fruits Basket. So, I have two recommendations for the same demographic I believe you may enjoy. Check out Honey and Clover and Nana, also I'd highly recommend reading Fruits Basket manga at some point if you enjoy the anime to the end.

Razer May 14, 2011 1:12 PM
I'd say those are more than enough, that's the majority of the later games after all, and I have yet to play Vesperia myself since I don't have a 360.
Lol certainly looks like it though to be honest I'm not really sure what that's actually based on. I watch a lot of anime that look even just mildly interesting but it's not as though those strongly represent what I like to watch xD

Razer May 13, 2011 8:51 PM
Hey randomly came across one of your comments in a thread and saw that you're (fairly) new here and decided to stop by to welcome you ^ ^ And you're a Tales fan from the looks of it so enough said xD

IIxAnxietyxII May 5, 2011 2:44 PM
luvin that RJD2-Ghostwriter track u posted.
All Comments