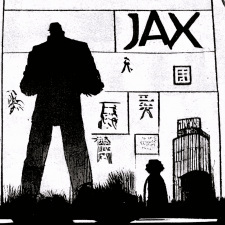 PedroFerraz Jan 31, 2019 8:45 PM
Happy birthday of 30 years, mister Jax (and this time, I sent the message in time for the celebrations), how is adult life going for ya?

So after completing the 2nd season/part of GinEiDen (the Japanese Acronym this time around), your fav character is Walter von Schönkopf? a very solid choice in my opinion, he's in my personal top 10 and everyone there are pretty close in quality.

I am still awaiting for your answer of my last comment too.

But seriously dude...
>you recommend LofGH (acronym for Legend of the Galactic Heroes) to me.
>didn't see that LofGH is one of my favorite animes, that three characters of it are in my ten favorite anime characters and that I practically rewatched all of the main series, the two gaiden series and one movie.
man, it's nice of you to recommend me this series after only reaching the half of the first season and that I'm glad that you're liking the series, but what the heck.

With that out the way, the animation is indeed dated (though I would personally say of it being retro more than dated), but the overall execution of this series and the other production values like scenery, soundtrack and dubbing being some of the best of the 80s & 90s makes the animation having some errors or not being "movie quality", be totally insignificant in the overall work for me.

Of it being more words over action. well, thinking of it in hindsight, it would have being weird if the series was NOT taking the "more talking than actions" route. especially after rewatching & searching the franchise myself.

On your opinion now,what are your favorite characters on LofGH?

PedroFerraz Dec 19, 2017 2:47 PM
hello,Jax. I'm curious,what are your impressions and opinions,of the twelve episodes of Legend of the Galactic Heroes that you have seen by now?

AurafullAlex Jun 28, 2017 2:42 PM
You have also haven't listed down No game no Life and k on! which I highly recommend checking out, especially since both are amongth the top 100 most listed on this forum and are very well made.

PaperCutAssassin Jul 11, 2016 1:37 AM
Your Bakemono no Ko review nailed my thoughts exactly.

Vensito Feb 4, 2016 2:59 AM
This is actually my first time watching it through actually lol. My friend wants to watch Tri together so he said I should catch up :P.