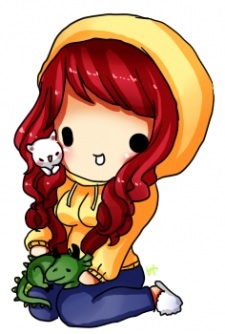 I played through oblivion once or twice when it first came out. Never touched skyrim though, even though everyone I know played it for weeks on end.

I don't have a lot on steam, just Dota and Counters strike really. Besides old school games like Zelda and pokemon, that's all I play. Really most of my free time is taken up by Magic the Gathering. Have you ever heard of it? It is a card game that I play competitively. I also write for a website about it, so I have to constantly keep myself involved in the tournament scene etc. I just got back from a big tournament out of state actually. My group and I did very well, and my brother even got a feature match and got on "t.v" for a bit.

-Spooky- Jan 4, 2013 8:54 AM
I have never played torchlight, but I have a buddy who plays it all the time. I played Diablo 2 when it was really big, and I have played 3 as well, from what I hear they are similar. Never played WoW, never had a strong enough internet connection back then. =/

Yes it indeed did.
You're also under some fire in regard to that "it wasn't trolling, it was bullying" comment.
Gotta love MAL.

I would of done the same as well, sometimes I have to also see what all the fuss is about for myself. Kinda similar, but not really, recall seeing a review of Ergo Proxy where the user described it as being too 'challenging' to watch. After those lines, I knew I had to see what it had to offer!
Also, let me know how you feel about SAO after episode 14 :P

Oh, having collections are pretty nice I'd imagine. I surely would want to get DVD copies of Ergo Proxy and Steins;Gate right off the bat if I had the money to spar! I have yet to watch Death Note though, keep meaning to get into it, but just a little put off by the 37 episode count >.<

And finally, let me be the first to say, happy elated birthday! ^^

Shoryu Dec 4, 2012 4:03 PM
I have not heard about Ghibli producing a game o.o! In fact, I don't know that much about Ghibli other than the films I watched by that particular studio. My interest is piqued, I'll have to look into this, thanks! ^^

Word of advice, if you haven't already, pleaseeee, do not go near the SAO forums on this site, I beg you! So much hate/trolling takes place there that it may degrade the viewing pleasure of the show, as it did for me, shamefully to admit XD
But yes! The initial episodes were enjoyable, predicated off the fact I could also get the lingo of MMO gaming. Not really a heavy MMO gamer at the moment, but I did play SWG: Emu (Star Wars Galaxies: Emulated) for about a year or so; quite interesting to see such terms being used outside the realm of MMO gaming and into anime!

The more I think about how Elfen Lied panned out, I do see how in some regard, it does seem rather..rubbish to an extent. I haven't re-watched it yet, or any other show for that matter, but after reflecting on it, as well as reading the comments from other people, the perception of it does change. Though, so far, I rate based off a first go on watching a series.
Hopefully Higurashi (both seasons) will be enjoyable for you as well! :D

Oh yes, last few episodes of Steins;Gate were quite a blast indeed!
The movie, honestly trying my best to have my expectations rather low (sort of tough to do so...as you may imagine), so I don't ruin it for myself expecting something rather great after watching the series. So, excited? YES! Just a bit...worried at the same time of how well it will turn out~

And just trying to finish Mawaru Penguindrum since it was a recommendation that could be similar to Ergo Proxy along the lines of being initially confusing, and then pieces of the puzzle would fall into place as the story continued :)

Hm, just curious, but what did you like about Elfen Lied? The reason I ask is because if you enjoyed the gory/'sickening' aspects of it, try Higurashi no Naku Koro ni.

OHAI THERE. Long time no chat.

-Spooky- Dec 4, 2012 9:37 AM
Just finished ano natsu de matte iru. It was good, certainly worth the watch if you have not seen it yet. Re-wacthing fate stay night while I find a new anime to check out. Stiens;gate is on my list, so maybe I'll check that out. And yeah, I never really go to the forums anymore either. I really only come here to keep up on anime news, update my list and research different anime or characters.

I'm just finishing up my 3rd semester of japanese and boy is it tough. I never expected it to be this difficult but they really ask a lot from you here. Crossing my fingers that I do well on my final exams.

What MMOs do you play? I was never really into them, but I like RPGs in general. My brother is playing the first Fable right now. We used to play it a lot back in the day and so this is some pretty nice nastalgia for the both of us.

-Spooky- Dec 4, 2012 7:01 AM
Dont worry, i remember. :) i faded out too for a bit, as far as visiting the site goes. Im coming back though. I have found it oretty difficult to find people with similar tastes as well. But yeah, hi again! How are you etc?