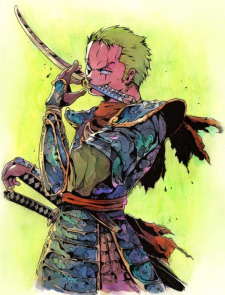 Samt_ Dec 15, 2016 8:17 AM
Yeah, VN adaptations seem hard to pull off properly, sometimes even when they're not that bad they're just missing so many important explanations from the VN to the point that it's filled with plotholes and feels incomplete

Gotta say Steins;Gate is as close to perfect as you can get for a VN adaptation out of the ones I've seen so far (now if only the other ;™ anime cloud pick up the slack, lol) despite the fact that I had not played Steins;Gate's VN I didn't feel lost with the story and what was going on much

..plus, tsundere airhead power is real in that show x)

Samt_ Dec 14, 2016 10:58 AM
Yeah exactly, I'm also really busy with school, it's been hard to make time for anime during these times too >_> I'll make sure to give Drifters and 3 gatsu a watch sometime soon, that is if I manage to finish Sankarea first xD

I noticed quite a number of people were excited about Ao no Exorcist S2, I never watched the first season so idk what to think of that though, and considering the last season of Gintama managed to take the crown from FMAB for a while it wouldn't be so surprising to see this one at the #1 spot again, lol
Youjo Senki seems really odd, especially the art style from that cover.

Since ;Child is it's sequel did you like ChäoS;HEAd? personally whenever I see a VN adaptation I try to avoid it most of the time, unless it's something that really interests me.. in that case I will try to play the VN xD

Samt_ Dec 13, 2016 3:43 AM
I'm doing good, thanks
Personally I've been really out of seasonals, haven't watched anything for the last 2 seasons but I might give Drifters a try soon since a friend of mine really seemed to like it. 3-gatsu no Lion also seems cool tho, I'll add that to my ptw actually

This season didn't have anything that pulled me in, I was initially interested in watching Izetta The Last Witch but after waiting for the episodes and reading some reviews I changed my mind, other than that I'll keep Lostorage Incited WIXOSS in my ptw list for now, it's a sequel to another series I watched so I'll give it a try some other time

For the Winter season, I'll definitely watch KonoSuba 2 if I end up finishing the first season beforehand, other than that maybe Masamune-kun no Revenge, Kuzu no Honkai and Hand Shakers depending on what kind of ratings they get
..Just noticed there's another season of Gintama, oh boy! there will be even more threads complaining about these taking over the top list again for sure xD

btw really sorry for the late reply, I've been a bit busy for the last few days so I didn't log in to MAL