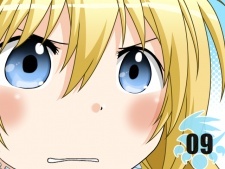 Most surprising:
1. When Komiyama somehow touched Chinami heart and they became a couple.
2. When Nishino confessed the same method as Junpei with a chin-up

The Sweetest:
1. kissing Nishino in the park bench under his own accord without any accidental involve.
2. Teaching him not to give up easily during the swim practice.
3. Show him what a true embrace is
4. Junpei being depress after seeing his prep class test score and Aya ignoring him (he thought she has a BF and now they can’t talk as friends), he later unintentionally knowing, went to Nishino work place for comfort and support, it was very sweet moment for me.

The "what were they thinking":
1. When Amachi confessed first thing he got into the classroom.
2. Junpei constant rejection of Satsuki

Depressing moments:
1. Junpei felt depress that Nishino doesn’t think much of him (beginning) and a car almost hit Junpei.
2. Satsuki pitiful rejection and reason why he string her along for so long.

and finally, the most emotion moment(s):
1. Nishino breaking up with Junpei, him crying for 2 hours in cold street and regretting that hedidn’t do anything to stop it.
2. Aya confession and Junpei rejecting her.
3. Junpei & Aya in the heat of moment almost kissing each other at the field trip temple and Nishino catching them in the act.
4. The airport scene, when Nishino has to leave for France.
5. Junpei kissing Nishino in the park by his own accord.
6. Nishino pull-up confession.
7. The last reunion of Junpei x Nishino
8. Junpei going to Nishino home (after rejecting Aya) and leading up to attempt sex

vansonbee Jul 23, 2011 8:22 PM
It was very well done indeed. Just to let you know, the story was suppose to end at the middle school arc with Aya and Junpei realizing their feeling for each other, but the characters really entice the readers. Not sure its either Nishino or Aya or Junpei, or maybe the circumstances that they're in love triangle and their characters were well too develop.

Any special memorable moments in this series for you?

What your opinion on the series and the characters you like?

Scirm Jan 1, 2010 1:05 PM
I think it would be too expensive for you, flight to Poland and get me XD
Hmmm... I think I should check what have you got in plan to watch :D maybe I already watched it :D

Toki wo Kakeru Shoujo - no I'm not so cruel to spoil it, this is my favourite movie ;)
Umineko - don't watch it, it is not worth to waste your time
Sola - great, I really like it, I thin I should rewatch it
Shuffle! - cool, KyoAni made it so it must be awesome ;]
Myself ; Yourself - adorable, 8/10,
ef - a tale of melodies
ef - a tale of memories - why it is still in your plan to watch list? ;)