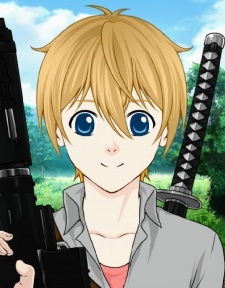 ISKA-IX Jul 11, 11:33 PM
Just finished WorldEnd: What do you do at the end of the world? Are you busy? Will you save us? and Chtholly is such a waifu.
Have you read the LN?

Jack_Hornet Jun 27, 11:19 AM
you mad lad
1k completed anime
congratulations bro
truly a man of culture that transcends genre, time and taste
hope to keep seeing your comment in the future

jap_mans_reviews Jun 2, 8:32 AM
Thanks for the link! The movie just got released on DVD so many of the sites have now a digital copy of the movie. Thank you for the kind gesture 'fellow anime fan' ^^

jap_mans_reviews May 19, 6:51 AM
I saw that you have seen Tenki no Ko. I can't really find it on pirated sites, I may pay for it if it doesn't exist. Would you mind telling me where you streamed it from?

Charlia Jan 24, 2019 4:44 PM
Just how much free time do you have like seriously... i would love to watch as much as you but don't have time to however that doesn't mean i don't watch what i can and also, great anime for what you put for your favorites!


and whats with the hater below...why is he complaining so much about your opinions...


"Also if you play Nasu game for a long time then you should know full well that they are like made a mistake."

> I FRIGGIN PLAYED BOTH FATE/STAY NIGHT AND TSUKIHIME. HAPPY? AND A LOT OTHER NON-VN GAMES RELATED TO TYPE-MOON.

"Nasu game mistranslated for a while but after they fixed it the story got totally changed."

> WAY BACK BEFORE, GAME FIXES AND PATCHES RARELY HAPPENED. FATE EXTRA WAS NEVER FIXED BECAUSE IT DIDN'T HAVE TRANSLATION ISSUES TO BEGIN WITH.

"That information is real and directly from many people too. I research them out a lot."

> THIS THING HAPPENS DURING DEVELOPMENT/OR TRANSLATION. YES, THEY DO CHANGE SOME THINGS TO MAKE IT APPEAL MORE TO THE WEST BUT IT DOES NOT CHANGE THE STORY IN ANY WAY, ONLY THE WAY THE DIALOGUE IS PRESENTED.

They did once too like "Neptunia" when the game needs to make people love the characters as possible but the game use insult words which is a minus point to its strong point.

> NEPTUNIA IS A FRIGGIN DISGRACE TO JRPG'S. (Okay, that's a bit of a personal thing that's unrelated to the topic but I just wanna vent out my anger with this game.)

"I never trust anyone as long as it not "Directly source" Say as you might but if you want to be smart you need to really research about them.
I search all the 100% true info, not like Wikia that's up to the global except Japan cause they don't understand us.
It's like giving all the freedom to all the people who don't really know about it to edit them but the true source can't use it."

"Remember that the people who wrote the stories are VN professional. "

> THOSE GAMES HAVE DIFFERENT WRITERS, NOT ALL HAVE EXPERIENCE IN WRITING VN'S.

"Not like how most of the JRPG are like "Beat the boss to clear the game" kinda game."

> YEAH, JUST LIKE FATE/EXTRA. HAVE YOU EVEN PLAYED THE DAMN GAME? AND THEY ARE NOT JUST LIKE THAT, THERE IS MUCH MORE STUFF YOU CAN DO ASIDE FROM CLEARING THE GAME. STOP TALKING ABOUT JRPG'S IF YOU CLEARLY BARELY HAVE ANY KNOWLEDGE ABOUT THE FRIGGING GENRE. GO PLAY MORE JRPG'S. AND FYI, TO CLEAR

"Type-MOON at that time they want to be unique, unlike any RPG by making the "VN based RPG" so what you are saying now is also like an insult to them."

> FATE/EXTRA IS NOT UNIQUE AT ALL, YOU CLEARLY HAVE NOT PLAYED MANY JRPG'S.

"Also that Rate 10? *Sigh* MAL can show you how many episodes you have seen right? It means that episode one is a 10/10, not the entry series. "

> YOU LITERALLY SAID "OUT OF ALL FATE/ ANIME, THIS IS THE BEST ONE YET." AND "IF YOU WANNA ASK HOW WE THE ONE WHO READ ITS VN FEEL". YOU PLAY FATE/EXTRA, NOT READ. AND GOOD THING YOU DELETED YOUR REVIEW, BECAUSE YOU'RE JUST MAKING A FOOL OUT OF YOURSELF. AND WHAT ENTRY SERIES? WTF IS AN ENTRY SERIES? OH, YOU MEANT "ENTIRE". SEE? CAN'T EVEN FORM A SENTENCE RIGHT.

"Also btw its a common thing that novel/VN came before Manga cause there's a lot of proving you can see.
Search all the currently manga that also have a novel and that will prove you that.
Manga need stories and art right? But if you already have a story beforehand like novel/VN all you need is drew them out.
I think you don't know the concept of what is born before the manga."

> SOME START AS NOVELS, SOME START AS MANGA, SOME START AS VN'S, SOME EVEN START AS ANIME OR GAMES. YES, IT'S A FREAKING COMMON THING AND THIS IS NOT RELATED TO THE TOPIC AT ALL. YOU DO NOT NEED TO HAVE A NOVEL/VN TO START A FREAKING MANGA, YOU CAN START WITH A MANGA RIGHT AWAY IF YOU WANT TO. FATE/EXTRA STARTED AS AN RPG RIGHT AWAY, IT HAS NO VISUAL NOVEL OR NOVEL, SO I REALLY CAN'T SEE WHAT YOU'RE TRYING TO POINT OUT HERE.

"They can do a straight RPG but the option will be too limited like only this set of weapon or NPC in your party
The other option is to use the VN style which will only draw the attention to those who love their style or stories.
The best one for sure that you should try to draw as many possible buyers as possible to buy it as possible by creating the *VN RPG* I mention."

> RPG'S ARE NOT THAT SIMPLE. PLAY MORE GAMES. A LOT OF RPG'S HAVE CHOICES THAT WILL AFFECT THE STORY AND MULTIPLE ENDINGS. AND WTF ARE YOU HIGH? HOW CAN AN NPC BE IN YOUR PARTY? DO YOU EVEN KNOW WHAT AN NPC IS?

"Also, there's 100% no statement that Wikia is always right. The only thing that it mostly made a mistake is something that wasn't written a book just like History.
Some Wikia just left the info about some staff *blank* I search like so much there to where the point it that made me learn that Wikia isn't as perfect as you said.
Wikia surely has many people to give you the info but can't say its right if the true source can't use them or lazy about it.
Nothing is true unless you get it from the true source. I believe nothing as long as you didn't send me the true source just like I did."

> WIKIAS HAVE MODERATORS. I would agree that they're not always 100% right, BUT THEY MAKE MORE SENSE THAN WHAT YOU'RE SAYING.

Trails of Cold Steel is a JRPG and it has lots of fillers. It's obvious you haven't played many games. Stop, dude. You're just making yourself look stupid on the internet.

I won't even reply to some of your statements because they're ridiculous and not worth replying to. If you ask a novelist to make a manga, that novelist will make a manga. The difference? It will still be a story, but told through art in panels with dialogue. Now, is that still called a novel? NO, IT'S CALLED A FREAKING MANGA (or a comic). A MANGA, NOT A NOVEL, AND DEFINITELY NOT A NOVEL MANGA.

VN's can have RPG elements, nonetheless it still cannot be called an RPG. Want another example? Ar Tonelico is an RPG that has VN elements, but it is not called a VN. While any time anyone can edit wiki or wikia pages, most of the time they have accurate information and are certainly more reliable than what you're saying.

Wth you're just redirecting me to type moon pages. Yes, "Type-MOON x RPG project."
Oh yey, Type-moon made an RPG this time, not a VN. A game dev company can make games of any genre they like, okay? Not just because they've mostly made VN's, means that they'll always make VN's. And it doesn't necessarily mean that anything they make is related to VN's. Ever heard of Fate/Extella, Fate/Grand Order, and Fate/Unlimited Codes? It's gonna be really funny if you call those games a VN too just because they're related to Type-Moon.

My advice? Go play more games. It looks like you don't know much about game genres, especially about RPG's.

But then again, you've given Fate/Extra a 10/10 rating even if it only started airing and called it the best Fate anime. Maybe I really am just wasting my time here.

And for the last freaking time, Fate/Extra is an RPG. Not a VN, not A VN RPG. Okay? I'm actually doing you a favor for you not to look dumb the next time you make a review. Cheers, mate.

omnislack Jan 31, 2018 9:03 AM
And a VN with only a single route with no choices is called a Kinetic Novel, an example is Planetarian.

omnislack Jan 31, 2018 9:02 AM
Look, dude. I'm a gamer since I was a child and I work for a game development company. I've played numerous games of various genres and Fate/Extra is a friggin RPG. Not just because it has choices, a character-driven plot, and multiple endings it's automatically a VN. In fact, A LOT OF RPG's are like that. Even NASU, the mastermind behind the Fate franchise, says Fate/Extra is a JRPG. I can give you several links in the internet stating that Fate/Extra IS AN RPG and NOT A VN.

Please look at them and stop changing the definition of genres.

And excuse me, but the Persona franchise received better scores, is more well-known, and are better games than Fate/Extra.

Argo159 Jun 30, 2017 3:55 PM
i don't even watch Seikaisuru Kado from this season but tsuki ga kirei was definitely good, for sure. great happy end
All Comments