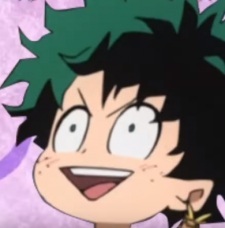 Youmu_Konpaku Jul 6, 2019 9:03 PM
Yeah usually I get something like 10-20% with people, the most I found so far was 75%.
It's rare especially considering how I rate things and the quantity I've watched.

kyoudai Jun 20, 2019 10:10 AM
I think vegetarianism is a good thing, both from health and ethical points of view. I was a vegetarian for six months or so (including the winter holidays, which was hard!) about 20 years ago, and again for a short time a couple times since then, and I think it can be a good way to eat. Veganism, though, is pretty extreme, and in virtually all cases it's based on ethical beliefs, not on health concerns, since strict veganism is actually a diet lacking in several major nutrients. People who go into veganism blindly, without realizing what they really need to do to get those lacking nutrients, are likely to suffer from poor health as a result. There are supplements and so forth that vegans can use to get those nutrients — but most vegans will even refuse to take supplements that are packaged in gelatin-based capsules, because gelatin is an animal product.

Ovo-lacto is just your basic "vegetarian": No meat, but eggs and dairy are ok. That's what I was for a while, and I found that I was relying a lot on cheese to get my fat and protein a lot more than I probably should have been. Vegans don't even have that option, though. What's more, the one time that I tried veganism (for all of 3 hours), I went shopping at Trader Joes and found that even the cheese made from soymilk contained some amount of animal products. I went out to dinner with my boyfriend that night, and we went to Applebee's. I had plain pasta with plain marinara sauce. Even that probably wasn't vegan, but it was enough to tell me that vegan wasn't for me.

My mom has had a lot of gastrointestinal issues, and also experienced some taste alterations over the years. She used to eat "regular, normal food" like most people do, but then she got ill. Now she has pretty much the same things everyday: yogurt, banana, and nuts for breakfast, some snack crackers or something similar in the afternoon, and salad and a roll for dinner, followed by no sugar added/low fat "ice cream" many nights. Not for me.


Exactly! I think its only purpose is to annoy. I could show you some pixilated stuff that you can get off to. (I don't know what turns you on, but here's some NSFW links: «close-up of female» and «Kirishima (MHA)» (page 3 is pixelated). Well, I don't know if you specifically can, but some people definitely can. But, no, I don't think it's weird that you can't. A lot of people think that folks like me are weird for being able to get off to drawings instead of photos and videos, after all. I am generally non-judgmental about pretty much everything, so yeah.

It's definitely common. When we become aware that we do hold two contradictory beliefs, it causes what's called cognitive dissonance. Yeah, I realize that's much easier said than done (or, really, impossible to do) — but we will never get anywhere if no one says it. :) And you're exactly right. Humans' inherent greediness always gets in the way of a better society.

I'm not familiar with html codes, only bbcodes I knew.

kyoudai Jun 19, 2019 8:10 PM
The article I read at the time was talking about veganism, which is hard to keep up even outside of major cities in the US. The author's (who lived in Japan) vegan friend had gone to visit, and found that she couldn't even get coffee from a vending machine because it contained animal products. It was so bad, she said, fine, I'll skip the veganism and just go with ovo-lacto vegetarian. And that's when they ran into the special request thing. And yeah, salads all the time would be hard to do... though that's what my mom has for dinner 6 nights of the week, somehow.

Censorship is required, but it doesn't even cover anything! Most of the stuff I see on Pixiv has 1-3 black or white line(s) drawn through it in a strategic location. Sometimes it's pixellated, but even those are barely censored. (Not that I'm complaining, you understand...) Printed material is a little more censored. Most commercial BL manga, for instance, has the penis entirely whited out. They still show the tongue licking the air, of course.

But Japan has a complicated and contradictory view of sexuality when you think about it. They're very open about sexual topics in fictional representations, but when it comes to reality anything that isn't the expected behavior is considered abnormal, is shunned, etc. I've even read a fujoshi writing in her afterword section of a BL manga once talking about how thinking about their brother as a bottom really weirds her out -- even though one of the characters is based on him. They are much more "adventurous" in their porn than the western world -- but they are reluctant to talk about sexual issues in person, probably even with their friends. Here in the US, we talk about it all the time, but we're a lot less tolerant of fiction that represents fantasies of deviant behavior like rape, loli/shota, etc, so I guess we're just as contradictory. Myself, I don't know why we can't just let people do and be whatever they want, so long as it doesn't cause harm to another person or animal.