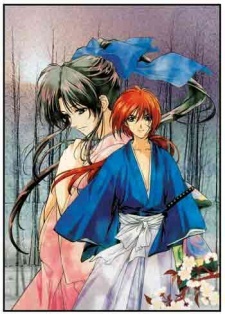 Trever May 20, 2019 10:27 PM
Also, I don't score anime for the simple fact that I don't think they matter. My taste in anime is also constantly changing and when I did score them, I found myself changing them over and over and I just can't keep up with them anymore. I just like what I like, don't need a number to know that. To each their own.

Trever May 20, 2019 10:22 PM
I'm planning to watch some mecha shows like Gasaraki, Argento Soma, and RahXephon, and had spotted your review for Gasaraki. I also like your profile pic, Rurouni Kenshin is one of my favorite anime. Anyway, I decided to look at some of your comments and the drama and looked at some of your other reviews/ratings too, especially the Neon Genesis Evangelion one. I'll get to that. First, I don't agree with a LOT of your ratings, but I can't make you change them. As far as the drama, anime is completely subjective. No anime is definitively bad. We all have our opinions, but that's all they are, opinions, and that's just fine. As far as your age goes and how many anime you've seen, I don't think that really matters or should. I also think the idea that older people or people with families, etc, shouldn't watch anime is ridiculous. People should be able to do whatever they enjoy in their free time as long as they're not hurting anyone else.

Now for the best part. Evangelion..... Wow I hate that anime. The reboot movies are fine, love the animation, but the original series/movies, to me at least, were unbearable. Got through them, but they just did not work for me. I see what they were going for with the depression and anxiety themes, and all the symbolism. I understood it all, even read explanations in case I missed something that might make me enjoy it more. I missed nothing, and still hate it. I honestly like the animation, but the characters. Man... Horrible. Shinji is easily my most hated character. More than Griffith, Shou Tucker, and every other hated character. I just didn't like anything about him. I couldn't stand 99% of the other characters either. The only character I found myself liking in the end was Ryoji, and he was barely in it. I definitely prefer Anno's debut work Gunbuster so much more.

If you're wondering why I felt like butting in to your comments, I don't know. Just felt like it and I'm also interested some of the series you rated 10's. I've thought about watching some of them before like Saikano and Now and Then, Here and There, but I never got around to them. When I need I might want to talk to someone about them. Welp, that's just about it. It's late, past midnight, and my brain isn't functioning, so yeah.

Considering I have more series watched, dropped and on-hold, as well as currently being watched... I think that 2nd paragraph goes right back at you. And let's not even begin with series I've watched and didn't care about marking. By your own standards, I'm a bigger expert than you are, so get your head out of your ass and watch more new and old anime to gain more perspective about the subject you're talking about.

With that last part I can actually agree.

My problem with your reviews and my base for saying you know nothing about anime, is that majority (if not all) of your positive reviews are highly acclaimed series that everybody rates highly, even if they are mediocre at best (Cowboy Bebop is overrated to hell for example). However, any series that shows a tiniest bit of creativity and doesn't play into the mainstream idea of awesome, you automatically downplay with reviews that, ultimately, make no sense and are extremely repetitive.

LILYInDespair Nov 21, 2018 12:31 PM
Hmmm.... i see.... your opinions are so valid and good.... and make sence to give thing the ratings you have... you are full of wisdom and knowledge... either step up in your life your reevaluate it because you are not just contradicting yourself but you are being dumb at it as well...

Huggykaze Sep 27, 2017 6:37 AM
Another dude who thinks that watching a few old anime series makes him an expert, spouting shitty reviews... At the same time, the same, seemingly, over-nostalgic dude ignores most new series or rates them very low simply because he didn't like the art... Dude, you are 40 soon, get a family or something...