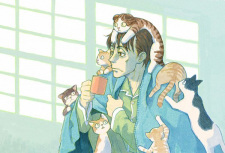 MrLegitimacy Jun 29, 2019 8:36 PM
I hope you like it! I've actually been planning to start Berserk very soon--within the next week, even!

MrLegitimacy Jun 29, 2019 12:58 PM
Of course, I respect the hell out of your anime assessments! By the way, I highly recommend the Death Note manga. I think the ending is a lot more true to the story up until then.

Gamer651 Apr 3, 2019 4:28 PM
The definition of Dues ex machina in google for another term is : Deus ex machina is a plot device whereby a seemingly unsolvable problem in a story is suddenly and abruptly resolved by an unexpected and seemingly unlikely occurrence, typically so much as to seem contrived. It has another meaning so It can also get confusing. ( Thanks for the feedback )

I am disappointed, Christina, for you to not know that(jk). And I am always on guard, our meeting seems to be inevitable. This must be the choice of Steins;Gate, very well. I am sure our paths will cross again, Christina. El. Psy. Congroo.

Gamer651 Apr 2, 2019 8:43 PM
Would be glad if you can also read my Steins;Gate review: https://myanimelist.net/reviews.php?id=304718 ( spent around 5 - 6 hours to make it compared to my Kaguya-Sama review that took like 1 hour or so) I'd appreciate the feedback, especially constructive criticism, thanks in advance!


( I see that you are a Steins;Gate fan as well, if so even more reason to read it! ) El Psy Congroo.