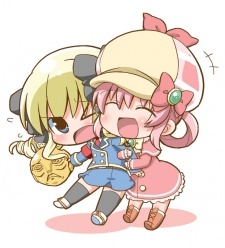 These shows have a similar appeal, in the sense that they are both about a group of girls striving to become something big in a musical setting. I found myself getting sucked into both of these shows because I wanted to see the characters develop their musical prowess from almost nothing, into something amazing, such as what is showcased in full glory in both shows' OP and ED sequences. Both series also have an extensive discography outside the anime, allowing for even greater immersion into their respective universes.