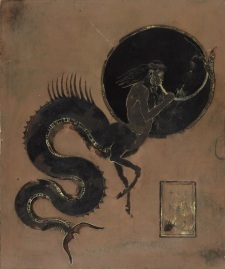 Harrymanhunter May 6, 2018 7:11 AM
Thanks! Since you're seeing LOGH, did you follow the correct order? Like, seeing the two movies first and then starting from ep 5 of the OVA? After that you have to see the two Gaidens.
But yes, thoughts so far?

mahoganycow Jan 16, 2018 2:09 PM
Thank you! I felt the same way while watching and just wanted to communicate that feeling to others and maybe save them from living the same experience.

That's one of my more divisive reviews, and every once in a while someone will stop by to assure me that I've foolishly misinterpreted Shigurui and it's actually a work of genius. Eh. I'm going by a four-year-old memory of a show whose narrative is already little more than a hazy storyboard, but I still just can't warp my perspective enough to see what any of them see. Individual frames or scenes of the thing might occasionally be compelling, but by the end it just doesn't add up to anything. It always ends up seeming to me like a case of people seeing what they want to see instead of what's actually there.

Anyways, I'm glad you enjoyed it, and thanks for dropping me a comment.

Yeah I was just NOT that impressed with the work. And while I applauded the soundtrack, I haven't even listened to it once lol. Maybe I should drop that in the review as an update lol.

I enjoyed Tenshi no Tamago as well. I don't know if I would have a similar enjoyment now as I did before, knowing what the film is supposed to represent (losing one's faith), but I still enjoy it more than Jin-Rou lol.

If you want to watch something with a similar tone but just straight up better than Jin-Rou, Texhnolyze would be a good replacement. Definitely a big fave of mine.

AestheticOnion Nov 28, 2017 11:39 AM
I'm glad you're enjoying it.
That would actually be Kyousougiga, believe it or not. But that one kicked a whole lot of them too. It kinda re-shaped my taste as a whole

KelseyAtlantis Nov 20, 2017 8:51 AM
Almost sounds like Risk but not at all. Hmm, I may have to try playing it some time. I typically enjoy board games, I just don't play them much anymore.

KelseyAtlantis Nov 20, 2017 6:16 AM
I guess I have watched a few pretty long shows if you count sequels and stuff but 110 seems like too much for me.

It looks kinda hard tbh. I'm not super good with strategy games because I'm not great at thinking ahead. That makes me sound dumb but really, I'm just a bit too impulsive for strategy games. I have not played Go. How do you play it?

KelseyAtlantis Nov 19, 2017 7:34 PM
I may watch it someday but the length is also a bit overwhelming as well. I don't know if it'd be my cup of tea. I like drama anime but it just seems like it'd be a tad bit boring.

I kinda wanna play shogi but I probably would be terrible at it. I would probably get impatient and just make dumb moves just to get the game over with.

KelseyAtlantis Nov 19, 2017 6:46 PM
It seems like it's a bit pretentious and considering I've really only seen super pretentious people love it, I"m not too keen on watching it. I'm not saying you're pretentious, I'm just saying what I've seen from experience. Made In Abyss gets pretty intense so have fun with that.

3-gatsu was beautiful. I didn't know what to expect at all from it but it was such a nice show and I related to some of the characters quite a bit which is always good in my opinion. I am planning on watching SEL, I just haven't gotten the chance yet. I might try to watch it after my semesters over. I'm in the mood for a more serious show.

KelseyAtlantis Nov 19, 2017 1:57 PM
I've heard so many mixed reviews on Legends. I've thought about watching it but it just doesn't interest me. Made in Abyss was really good. It made me feel a lot of things.

3-gatsu no Lion has been really great so far this season. I've already cried and it's not even halfway over. The only other two seasonals (that aren't sequels) I've been enjoying are Konohana Kitan and Kujira no Kora wa Sajou ni Utau, Konohana is a cute slice of life anime. I had no expectations or knowledge going into Kujira and I have to say that I'm very intrigued by it and I hope it stays good because I feel like it could go either way at this point.