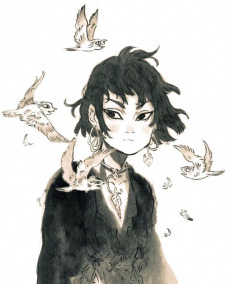 GGGP2 Mar 28, 10:17 AM
GGGP1 here, i lost my password and couldn't change it, i made this new account before in case something like this happens and i'm happy i did so, if you have anything to tell me please do that in the new account

Cindy-Uchiha Mar 17, 7:51 AM
Yeah man idk. Lately I've been into stuff that focusses on the feelings of charas, while my interest in action is fading.

I'll try Sleepless King for you, though I can't find it rn.
I also support your shoujo phase. Pls try Basara. Or Red River. Just an old shoujo w a weak to strong FL. Or Fruits Basket. First half was full happy-go-lucky, second half the depression hits.

BOOBS??????? Ight I'm in. But like where do I start with it? Idk man I just cant find myself reading or watching Bakem

I'm in my yaoi phase again.

I don t remember either. I found it somewhere, idk man. You should've put it on your PTR.

Mood_Muffin Mar 10, 3:40 AM
he's cool and strong, and also care about his family (in the church) and friends, but he doesn't show it too much
also, i cried when i thought he died lol, so I realized how important he actually is to me

literaturenerd Mar 9, 9:51 AM
I assume she’s a battle Android but she could perhaps be a bioweapon. It’s still not clear yet in the source material.

Mood_Muffin Mar 8, 8:14 AM
thanks for accepting it at the end ^^
oh, okay, who is your favourite character in Black Clover?

Cindy-Uchiha Mar 2, 12:44 PM
I just read Punpun and damn that manga is good. I dropped it a few years back and rated it a 1. Ppl rly change a lot huh

You can't just think I haven't seen One P M like that. I remember finishing one season (are there more?) and it was indeed pretty decent. Especially coll fights and humour. I remember not being able to get into the manga tho.

Final Fantasy is a joke, and not in a bad way. I used to want to play the games sm, and ended up watching the movies while not understanding anything.

Hmmmmmmm that's a difficult issue and it's just how you view it.
Owing his fans: as you said, he put his work on the market and people spent money and time on his work. It's the same with stories with rushed enings. It's like fooling and profiting of others.
Not owing his fans: you can argue that nobody owes anyone anything. Especially in our market that consists of production and consumption relationship. While he benefited from our consumption, we've profited from his production.
It's just about how you view life man.

Wow that's actually done pretty good. I guess you can see it as a master fanfic.

Hydrolik_Ito Feb 26, 2:46 AM
So what's your level of understanding & level of talking/writing? Do u not speak Arabic with ur family?
I say this is an opportunity for u to practice & maintain it, what do u think?

Hydrolik_Ito Feb 25, 4:12 PM
Really?! I thought it started to looses its charm as time went on, it was soo much better in the past! (The last time I watched anything on it was probably 2017 idk)

I want to read Beasters lmao not now, but some time.

One Punch man sexy? Geuss we gotta add baldness to your kinks.

Ever thought of reading Eden it's an endless world? Seems smthn for you

I watched the first time as a kid too on the channel Spacetoon! Then I rewatched online I think once in Arabic again & once in Japanese with english sub
All Comments