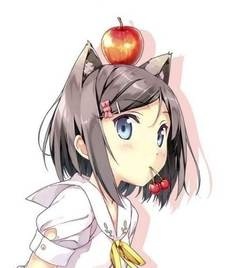 It isn't really the work itself that's stressing me out but there's just been a lot going on in my life lately and it's affected my work a bit. I'm feeling better now so hopefully my grades will improve as well! c:

Oo haven't seen Log Horizon yet. Apparently it's supposed to be like a family friendly Sword Art Online? xD
Re Zero is amazing! I found Subaru to be an amazing mc despite what people think, he's just so relatable ;w;
and YES Rem is a goddess don't let anyone tell you otherwise <3

aww dw about it! I'll be back at school next week so I might get a bit late too ><

I just wanted to get back in touch ヽ(・∀・)ﾉ

Thats great to hear! As for me I finished my first term of senior year. It's been a bit stressful but I'm coping.
Ooo I've watched so much anime in these past few months! Some of my favourites would have to be Gurren Lagann, Hunter x Hunter and FMAB. You should check them out if you haven't already!

I'm also streaming Re Zero together with a friend on MAL c:

I can't believe I was this late ;w;

Kimi no na wa is one of my most favorite. It was my starting point and I still love it

I will consider writing reviews if you are serious XD. It is a way to express my feelings somewhere so yeah. It is an option.

I haven't heard of both of them. I need to take a closer look at them and then I will let you know. I have some "plans xD" at the moment so it can take a while ;D

Thanks for all the suggestions. You were really helpful to me. :D

And no problem, I understand. I think I'm going to be busy too actually. School stuff ... :/

ilumiMATI Jan 5, 2019 12:55 PM
Wow, You are well organised with your watching plans, aren't you ;D
I'm not that concerned about watching new seasonal anime. I'm likely to pick whatever interests me but that's just my chaotic style I suppose xD

Yeah, of course. I can give you few recommendations

1. Strategy, masterminds, intelligent protagonists
I would definitely recommend Death Note if you like shows with a lot of manipulation, masterminding you know. To be honest I finished it in two days. It's really addictive. Maybe that's why it is so popular.

Alternative similar show could be Code Geass. It has an Intelligent protagonist as Death note does. So there is a lot of strategy like on a battle field. But in Code Geass it's more political. There are more fights, mechas and super powers.

So if you prefer more psychological battles then I think Death note is better.

2. Sci-fi, romance, super powers
Guilty Crown. This is the first episode anime that I have ever watched so maybe that's why I'm here xD. The first one was a movie – Kimi no na wa. I don't know what to say about it. It is a little like the Akame ga kill. There are weapons called voids that are within souls that can be used to fight but not everyone is able take those weapons from humans. It is somewhat similiar to teigu from AGK. However I think it's more interesting than AGK but it's my personal opinion. There is a lot of action and the characters are dynamic. I highly recommend even if I described it poorly as you can see xD

3. Emotional, Slice of life, Fantasy
Violet Evergarden. Oh my god, this show is really great in terms of emotions that come with watching. The main heroine is a person who was mainly a soldier, like entire life was fighting. And because of that she has lack of the social abilities. She doesn't understand people's emotional situation and she learn through entire show what does love even mean. Really great anime. Perfect soundtrack, beautiful graphics, interesting stories shown.

Maybe that's enough. I don't know if you are interested in some of these but I really like them and I feel you could like them too :)
My incredible describing skills surely convinced you hah xD
If you have something to recommend too then please do :D

Actually I haven't find anything yet. I guess I will watch some of the pre list. I was thinking of Ansatsu Kyoushitsu, tokyo ghoul or ghibli movies. I will probably watch some popular ones that I haven't seen yet.
What about you? Have you found something interesting?

ilumiMATI Jan 3, 2019 5:54 AM
Hi I'm fine. Actualy a little disappointed about going back to school.
At least I have winter break sooner than before so there is some time to watch something. What about you? :)

hassasin-1001 Nov 2, 2018 7:22 AM
I am almost all time counting, creating words and choosing favorite characters in forum games haha