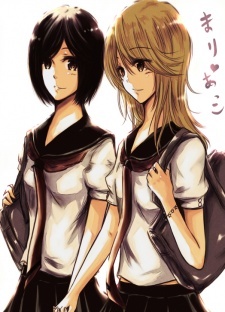 Dreadogastus_F Mar 27, 4:30 PM
Greetings, FreakyTy. I was perusing your list of animes. Saw your listing for Sasameki Koto. One of my favorites. The animation is the middle portion of the manga. (Big surprise I know.) To my point. Sumika and Ushio's story is concluded far better in the print version. Cheers!


What anime is the gif below the "I'll do it with my hands" pic?

leosapathy Jan 18, 2014 7:08 PM
Very true, Pitou scares the bejizzles outta me. Yeah I haven't been a viewer of the horror type of anime too, well I've only seen about 4 which consists of Akira, Another, Ichigo 100%, and Paranoia Agent to some extent. I'm a bit hesitant to watch Elfen lied and serial experiments lain as excessive bloodshed used for constant shock value is a turn off for me - though I have heard good things about those shows.

I loved the scene where that penguin ant died, when he/she turned around only to get their head sliced off by the king's tail, thought it was pretty funny lol. And about one piece... is it worth watching? All my friends keep recommending it...that along with soul eater and fairy tail which looks stupid imo lol.

YaN333 Aug 20, 2013 12:26 PM
There is a spin-off where they take a different spin on the series in which the Loli is the main character... I think Kotonoha most likely just became a shut-in and became an "exile" in her family because of how insane she would have become.

I've accumulated a lot of consoles over the years...

Personally, I can't do too many FPS games, and I'm not a huge fan of certain M rated games in general. I'm looking forward to KH and the new South Park game for the most part.

I play mostly Portal 2, LoL, Tf2, and L4D2 for the most part. I'm not a huge PC gamer myself, but if I'm bored than I'll play some games with my pals. I'd never play a PC game by myself though... I pretty much only play for the high multiplayer aspect.

I really enjoy pretty much everything Naughty Dog creates to be honest. I feel like Uncharted, The Last of Us, and such are the way that I wish FPS games were like. I enjoy the adventure aspect of it, and how the gameplay works. If I could, I would try to push for the FPS genre to change into more of a mix like those games. Just my opinion though. In regards to naughty dog, Crash Bandicoot was my childhood. Along with Spyro, KH, and Nickelodeon games.

YaN333 Aug 20, 2013 1:23 AM
It's all good. It's like if you were listening to Bohemian Rhapsody, it's okay to skip/be late for shit when you're listening/viewing something awesome.

I get where you're coming from. I can't really be asked to buy stuff related to anime that often, for it is much too expensive.

Kotonoha was also the girl that I liked. She honestly didn't do anything really "wrong" throughout the series. Sekai is pretty awful. I forget her name, but the loli was probably the worst girl in that series, objectively.

YaN333 Aug 19, 2013 2:49 PM
I've never really gotten into getting figurines or anything like that... It just isn't my thing. I understand where you're coming from with the expensive figurines. I just can't get into buying something that costs way too much.

I love FMA and Soul Eater (minus the ending) I'm glad that you enjoyed them too :D

I've been off of games for the longest time. They were like a drug to me... maybe I should get back into them.

Katsuragi for the win.