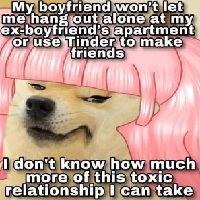 Bunille Nov 27, 4:41 AM
Congrats on getting banned man

jpjpabloremaster Aug 13, 5:35 AM
Hey, bro, i read your brief review of Lord and i was trying to find some chapters of this manga. Do you know were you have read it? If the answear is yup, i will appreciate if you send it to me.

Meusnier May 23, 8:01 AM
Hum, they not only closed the thread but simply deleted it. Thank you for your last message, it made me really laugh a lot; I am glad that I saved all pages.

Now I have five more messages to write before retiring from MAL's fora. Thinking about an impactful thread.

vuxk May 22, 10:09 PM
Huh? I don't get why you bring up sexual metaphors. Actually, I have a male cat and a female cat in my house and they love each other. What I was gonna say is, can't you get another cat of different gender (a female cat in this case)? That poor kitty must be so lonely.

vuxk May 22, 7:18 AM
Your post about the caves of Machpelah is the best XD I'm thoroughly enjoying it.
Have a good day.

sockerdricka May 9, 3:11 PM
Wow, you don't know it? I'm constantly surprised by how many people actually recognize the character. It's Snufkin (Snusmumriken in swedish) from the Moomin series (books/TV series etc).

That's a tough question, cause there are so many different reasons. It's kind of hard to keep it short. One reason maybe is the genres you have listed under "avoiding" - I don't mind any of them in general, regardless of genre a well made show is a well made show (I tend to keep away from horror though). There's also great entertainment value in some of the less critically acclaimed shows, just depends on your personal preference.
Some more reasons why I watch is just for plain entertainment, escapism and relaxation (big reason after soulcrushing hours at work), a lack of a more productive hobby, searching in a sea of mediocrity for more "treasures".
I had occasional slumps and got bored of it and stopped watching a few times, and other times get annoyed with poor quality and thousands of shows with the same boring gimmicks and tropes, but for some reason I still get back into it. It's such a diverse medium so you're bound to find some great stuff among all the lesser shows.

If you could bring yourself to watch more new shows, what would you be looking for?

sockerdricka May 9, 1:12 PM
"For example, the glasses MC is in a close combat fight. But throughout the fight the opponent never attempts to rob the MC off his glasses."

On a sidenote, that would make for hilarious comedy. In the middle of a serious/edgy fight, the bad guy steal's the heroic MC's glasses, leaving him completely blind (exaggerated) and bickering ensues.

Rixuel May 9, 8:50 AM
It reminds of a character (Agravain) in Fate series lol

Rixuel May 8, 9:40 AM
just curious, who is that character on your forum profile pic? (the dude with black hair)
All Comments