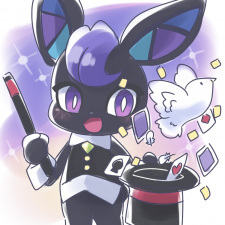 RogerSmith2004 Feb 25, 12:27 PM
I got you as the result for the Juror Personality Quiz. It was quite interesting.

S5_0014_81 Feb 16, 12:04 AM
Strongly disagree with your Hitoribocchi review, in fact it's one of the few SoL shows that were actually entertaining and felt that had SOUL compared to the average CGDCT out there

ycleped Sep 28, 2019 9:45 AM
I really gotta disagree with the fundamental basis of your Granbelm review.

For starters, I guess what we consider edge is a lot different because I didn't think Granbelm was edgy whatsoever.

The main issue I had with your review is saying what you wished the show would have included, knocking it for not including those things. For every one of your ideas that they could potentially add, they'd need to remove something else to make room. You mention that they cast off characters for less interesting characters, but you gave no examples of lesser-interesting characters that they discussed. Regarding Rosa, it was clear that the purpose of her character was simply to show what happened when a mage was defeated in Granbelm - she was a plot device. We knew nothing about her before then, and her character was one dimensional and bland, so how could it be even interesting focusing on her life afterwards? The plot had a direction it was taking and that would have completely derailed it. It wasn't about the characters' lives when they were defeated. And even if you wanted to see it, they'd still have to remove something else from the show to give room.

The one example you did give, regarding Anna and Ernesta, I feel is simply wrong. Literally all of the side characters got an entire episode-worth of content to themselves, detailing their background and history and how they ended up where they did. Focusing on each of their individual lives. Episodes 6 and 7 were almost entirely Anna-centered episodes.

You say that "But despite this she is more of a side character than a main one. There are interesting points to her character and her relation with Ernesta but it's often seen in the lens of Ernesta, the main character, rather than Anna. By focusing on Ernesta more the show willingly focuses on a much weaker and flat character and don't explore the interesting traits of Anna quite nearly as much as they should."

This is just simply not true. Of course when the show is building its plot and we don't yet know anything about Anna, anything relating her will be Ernesta's thoughts about her. But when it got to her arc of the show, basically everything was seen from her lens. Everything about her past and how she thought she had this immense magical power... was all seen from her perspective. And only at the very end of the arc do we find out the truth when it switches to Ernesta's perspective.

Furthermore, I'd even argue that Ernesta barely received any focus whatsoever. One of the very few complaints I had was that it didn't focus on Ernesta *enough*, because almost every scene with Ernesta, Mangetsu was also there. We really didn't find much out about Ernesta's history and past other than things she mentioned, unlike all of the other characters that actually showed scenes from their past and their lives.

And although Ernesta and Mangetsu were the two "main characters", the show switched perspectives so many times that until the last few episodes, there really wasn't a "main character" at all. You call them both flat, but I just can't see after the incredible character development Mangetsu received throughout the entire story how she was a flat character. Ernesta, I might agree with, because they didn't spend enough time showing her life and developing her character. The only reason her character was developed at all was BECAUSE of Mangetsu's impact on her, but I guess that was also a big plot point of the show, so perhaps it's a good thing they didn't really focus on her. But it's just completely off to say that they focused on Ernesta more than they did Anna...

Ultimately, these main issues I see with your review aren't even opinion based. It's as if we were watching two entirely different shows.

Tenderizer17 Jul 27, 2019 4:45 AM
I once had Slow Start in my favourites, then I tried re-watching it and I came to realise it's one of the worst anime I've ever seen.

shirorinkorin Jul 9, 2019 11:05 AM
there is nothing wrong with hitoribocchi jokes, it just you don't get it. no seriously, put hitoribocchi aside since it is not the main reason i came here in fact whatever i wrote after this is the only reason i came so you can just ignore the first line. i just sick of people who said something like "Being a Big fan of something"

BlackEyedGhost Jul 4, 2019 2:43 PM
Thanks for writing the awesome Tate no Yuusha review. It was nice to see someone actually look at the anime for the sake of their review instead of simply blasting it or praising it based on their own ideas of what belongs in an anime.

RebelPanda Jun 21, 2019 12:47 PM
Great Hitoribocchi review. It put into perspective why I felt so mixed on it right after Kai chose to ignore Bocchi, leaving her in tears. Tonal messiness aside, you are right about the shallowness of the comedy.

Ciel_M Apr 28, 2019 11:25 AM
i dont watch cute girls anime that often but some of your review are really good enough to give more insights. thanks to incomplete synopsis i think people are gonna rely on reviews so do your best. keep going