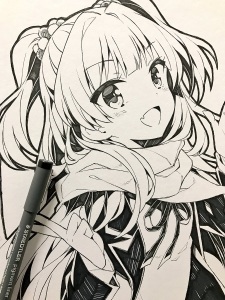 Even though I am not the same school as you,I am still near yours tho.

If ur school is really Sha Tin Methodist College,then I think this world is just really small LOL
I think we might meet someday and I am looking forward to it :D
Also I think we can become good friends :P

Once again sorry for replying so late.I am actually just a F5 student and these days I have been so busy with my exam,SBA,IES etc.(even though I still watched anime sometime as relaxing activity)

Talking about Steins;gate,u said"it is kind of like the experience of watching one of the Stephen Chow’s show".After seeing this comment,I do started to get a feeling that it's like Stephen Chow's movie/show.Before that,I watched Steins;gate as my 3rd or 4th anime,I actually didnt find that funny at that time cuz I'm not quite an Otaku and I found it to be very confusing when Okabe said something like SERN,MAD SCIENTIST, just being a Chuunibyou(中二病) u can say.

Answing ur question,I think in general,anime was my life,and now it's ONLY a part of my life.Before I started watching anime,I was just a shy,reticent guy,who did nothing meaningful,always thought that life is meaningless,and only played one game whole day.That game was Minecraft(PVP).At that time,I have no special talent and place in class,basically u can say I'm those meaningless characters in anime.However,as I said,I started watching anime due to Pokemon.I followed some of my friends,who were also as TOXIC as me,to play pokemon go.Then u know how things happened-I started watching more anime.Then during that time,watching different character in anime,watching how people communicate,watching different adventure,I started wondering whether I can be like them.Eventually,I saw myself as like a main character in anime,and I actively change myself,such as learning how to socialize/communicate,finding my own style,"FINDINGPURPOSE" in life.U can say I MIX my life with anime,and also I think that's why my favourite genre of anime are those which get me to think and to analyze,because I just thought deeper inside the anime and analyze,thus to make myself to be more confident,mature,and know how to become a better person.

But still,anime also had a HUGE negative impact im my life before.As I watched more anime and MIX them in myself,I started to wonder,what am I.I felt so lost at that period.I felt that I was not myself anymore and I was just a mixture of different anime character.And even later,I competed myself with my friend,as who watched anime more than the other.I watched anime like crazy for like 2 months.However,I still didn't manage to beat my friend because he watched anime before me,and he even used 2x speed.At that time,not only I thought I lost my original intention of watching anime,but also I felt my existence was replaced by him because someone in my social circle was better than me at anime,even though I wasn't good at it at all.Because of this,I reconsidered my life,and I changed my perspective for anime.I'm not gonna talk much about how I changed because it's another story.But right now,I saw anime as one of my hobbies,entertainment,and something that I truly enjoyed and would like to make this forever a part of my life.

For another question,I will answer that later when I have time.

I also wondered what anime means to you and how did it affect you in life.

My favourite anime is also Steins;gate.
One of my friends recommended this anime on IG and I thought to myself I could try it sometimes.
Then when I started watching,I found the first 12 episode were so bored that I really didn't want to watch.
However starting from the 13th episode,the plot started to change so fast and I started to understand the purpose of the first 12 episode,which I would say it's creating a suspicious mood and foreshadowing.
Seeing Okabe went through different world line was exciting and satisfied,just like when you finished those quests in RPG.
Finally with the last time travel,seeing how this anime"fill those holes which they shovel at the beginning"
AHhhhhh,it's just a huge satisfaction.

Btw I haven't finished Steins;gate 0 yet so please don't be a spoiler. :D

Talking about favourite genre,
I like those action type such as My hero academia ,Haikyuu.
If combining both action and adventure,I would say JOJO and Hunter X Hunter.
(I love watching those Characters fight in a smart way or being more mature in the adventure)

I like those sci-fi and mystery feeling anime like steins;gate and 20th century boy(actually this one is just manga,but I really want it to become anime one day)

(This kind of anime mostly need to use your own brain and think.I like the feeling that the audience could also get into the anime and think with the characters)

I like love comedy but with good emotional description,such as toradora and sakurasou.

(Even though it's love comedy,but it only counts when with good emotional description,which require the audience to think deeper inside one character about his/her feeling.)

Also I like those philosophy type,which I personally think the best anime of this genre is monogatari series.

(This kind of anime use tons of confusing word to talk about society or reality,which also encourage me to think more)

In general,I love those anime that I can also be a part of and "Burn My brain-燒腦"
Bringing some message or watching the character grow up.

After taking a look at your profile,I saw ur born in 2001,so I think you are a F6 student?
If yes then I think you are probably preparing for DSE ,which can also explain why you haven't watched any anime since Jan 6.

I would like to know more about you cuz it's so lucky to find one person that comes from HK in this website,meanwhile would like to talk that much with me.

I originally started watching some anime like Pokemon,FMAB,Fairy Tail,Doraemon etc on TV,but I didn't have the concept of "anime" at that time cuz I was still young.
Then when Pokemon GO came out in 2016,I played that game,thus made me wanted to know more about Pokemon.Eventually,I went to watch the whole Pokemon series again and then I was shocked by how interesting can anime be.After that I started watching more anime,especially for action,adventure,sci-fi etc.
Simply speaking,my inspiration just came from my desire of wanting to watch more interesting anime.

For me,I found those battle type,adventure type,"using brain"type and romance anime are interesting for me.
I wonder what kind of anime do you like. :D