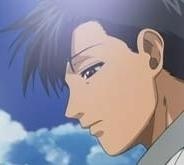 billybob300c Jan 10, 2015 3:15 AM
u made a comment on Death Parade Episode 1 talking about how machiko didn't cheat on takashi. i really wanted to think the same as u until i rewatched the episode:

1. http://i.imgur.com/MC4F5zr.jpg look at her silver ring on her left hand when she was in bed with another man. it's the same one that machiko & takashi were wearing when they both were playing that darts game. so that means the timing of this photo / flashback was DURING her marriage with takashi. If the photo was a previous marriage/relationship, wouldn't the rings be different? Do ppl who remarry wear the SAME RING FROM A PREVIOUS MARRIAGE? I'm sure in different marriages, ppl would naturally have different rings. Keeping a previous ring just brings back bad memories.

2. takashi overhearing 2 girls in the bathroom talking about how machiko has been seeing another man during her engagement with takashi. Those 2 girls were telling the truth because they were jealous of what machiko has.

3. machiko constantly on the phone while around takashi (although it's just takashi's suspision). If machiko was honest & not cheating, she could've just easily gave him the phone to check out what's going on. If u have nothing to hide, then it should be easy to just show him whatever was in that phone.

4. machiko's confession. decim was only surprised at her when she finally decides to come clean and confess that she did have an affair, especially having seen how devastated he looked & she even flashbacked to when they first met & his smile. when she remembered that, she felt the guilt of betraying him

5. Machiko's guilty face at the end when she went to the right-side elevator with the demon mask. That's a regretful face of having cheated on takashi.

-perhaps, in a show like this, we're made to think that there's a deeper meaning behind the character's actions just to feel cool or something when the evidence is just right in front of us the whole time.

The Slice of Life Club is having a banner making contest. The grand prize winner will get their own special card SE of choice.
For more information on the contest, click the banner above.

The Slice of Life Club is in a desperate need of card makers. Apply [here]

Our official member cards and badges are now open.
Visit the club to get yours!

Luna Sep 30, 2012 1:08 AM
I received your registration but you made a mistake. Please check your private messages.

DarkwingRose Jun 1, 2011 4:40 PM
Not taking any classes during the summer, I was hoping to get a part-time job though. The search is still underway. There's a lot of other things I should be doing this summer too. cuz I'm working towards a degree in social work i'm supposed to have 60 practical hours working in different locations pertaining to the social work field. Other than trying to figure out when and where I'm going to do all that, I've got nothing planned this summer.
Dude, You are so right about that! I wish they still had more of the fantasy RPG thing going on, rather than hacks and making deals over who knows what. It's hard to follow sometimes.

Life is good! But, if I could only get my diet to go great, everything would be perfect! LOL!! I have this bad habit of working out in the morning and then devouring everything in sight for the remainder of the day. I know that's not how it works. Me thinks I need to see a hypnotist to gain some self control. LOL!!!

No major plans for the summer. Believe it or not, I hate the summer months because it's just too hot to do anything. I do have plans to FINALLY go see Mt. Rushmore, the Grand Canyon and Niagara Falls. I'm looking forward to it.

AnoHana is excellent! I think the show is going to take its viewers on an emotional roller coaster ride. Have you picked it up yet?

I haven't watched Moshidora, but I am watching Hanasaku Iroha and I really like that. I just love Ohana! I want Minko to get hit by a bus!! What is her deal anyway? *smh*

DarkwingRose May 11, 2011 1:38 PM
me too! I was done last week! In fact I already have my grades back. Best grades I've got in a looong time. All 'A's and 'B's! XD I guess it helped that I had good profs this semester, and an incredible amount of luck. 2-3 major papers and 1 presentation canceled. Full marks. That is some serious luck. Hopefully next semester will be just as easy. I'm not hopin' for much though. So how've you been doing Fate? Did you see the recent chapter of Yureka?

Hannah_Ana May 11, 2011 5:30 AM
Sorry it's taken me so long to get back to you.
That's a bummer that you've got to break up with your girlfriend after having a great birthday. Was she there? Have you found someone else more to your liking? Or is it just time to move on? I hope it wasn't too awful of a scene for you. Break-ups are never easy. Especially when you've been with that person for a while.

My favs this season are AnoHana, Ao No Exorcist, and Deadman Wonderland. Although, I'm watching much more than just these 3. These are the ones that I look forward to the most. What are your favs?