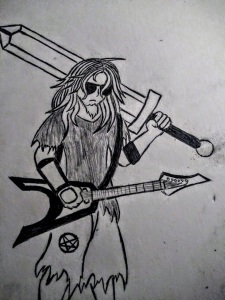 Mimi_Milk Nov 29, 2019 9:43 AM
Making friends on MAL lets me see what other people are watching and allows me to explore different types of anime to watch. Thanks for accepting my FR!


Lost because he didn’t see just one…

Losing himself on this endless journey
where his ideals were as clear as his vision,
but now are left just smudged and blurry
and exposing his true nature and decision.

To make things better than they were before
and to not become the night without the moon,
that gave his name and what he stood for,
now slowly fading away like a used perfume.

There is no solution that he can find outside,
nor somewhere that can be seen by someone’s eyes.
It’s at a place that hasn’t been touched by light,
deep inside where only he can recognize.

The changes that must be done to fix his sight
to see he can’t love the sun on earth but betray
the sun that shines with the same beauty and might
just 184 light years away.

…but two suns that must be followed.

captjoe213 Jul 11, 2019 6:09 AM
well, in the grips of depression, that song spoke to me. Still does. Sometimes I was me but now he's gone. I like Fade better than Nothing Else Matters when it comes to the slow stuff. It just speaks to the existential sadness that can leave a person hollow. I'd be surprised if all of them (the song is credited to all of them) didn't have experience with major depression at some point in their lives. Hearing it made me feel like someone knew my pain and all.

And then I put on Battery, because it's hard as hell for me not to get pumped hearing Battery lol

captjoe213 Jul 8, 2019 11:08 PM
we were once commenting on Metallica songs that changed one's life, well add 'Fade To Black' to mine, damn that song still makes me feel all kinds of ways even now.

saengdao Mar 31, 2019 11:23 PM
no problem, that's really good that everyone who's been presented with them think the same thing. you must find the best people around them, i definitely know people who wouldn't roll with it or would answer them with one or two words. they weren't deep but good enough for joking level, i assume no one is gonna ask "what's the meaning of life to you" on the first go anyway.

i'd do the experiment to find the licks... but they're all cherry. i hate cherry so i guess i've got to gain a couple of henchmen to test this out. if the waffle teleporter or 3D waffle printer ever comes out, does that count if i find it out..

maybe it's rad but it's probably one of the only things i got honestly, it's been inactive for a bit. but it's a nice surprise for people to figure out the shy quiet kid is a whole theater kid.
favorite role hmm.. not gonna lie, it's probably my 4th grade role as smee in peter pan. just imagine the director giving a role of smee to a skinny and tan asian girl. not to mention i auditioned for wendy but it ended up being a good role, since captain hook's crowd was fun to be in. that's definitely a part that got me into acting.
not gonna lie, the analysis is kind of simple but it's hard to put into play. you can always analyze character on screen within body language and facial expression, but there's also hidden things that add more. the lighting displayed onto them, like how dark lights on their face specifically usually indicates evil. backgrounds and the colors around them, etc. finding the characters philosophies, objectives, what's in their way really helps too. the more you connect and understand, the better.
though everyone says analyzing a character in script only is harder but i find it way simple. cause all that's there are the words and the rest is up for interpretation and you can make the character your own or you can be them. it's mostly reading between the lines and while you see what they actually say, you read the situation and can interpret their actual thoughts or how they feel. it's kind of like a book, but you're meant to see more depth in a script. not sure if that makes sense honestly?

Venelia Mar 28, 2019 2:17 PM
I like writing fantasy stories. My wish is to be an author. I am a Creative Writing major in college.
This semester I am doing a poetry workshop.
I did see your thread in Tiger's Taco Land
which is how I made the assumption that you are
an aspiring writer. Also, nonsense. Any body in
my mind can write. Writing is a creative outlet and I am
glad you have the courage to show those writings.
All Comments