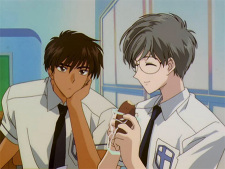 
It also falls into the same abyss as most shows: a lot of characters, too little development. Not to mention that, whenever they play, it's not exciting because there's no attachment to any of the players, there's no interest in the game since the show didn't prepare you for it, it doesn't make you feel hopeful for the MCs team, it doesn't make you anxious because you want them to win. Of course, the main idea wasn't the team playing baseball.

ThisAgio Sep 24, 2016 7:15 AM
Judging from the way it ended, there are low chances of a new season...
(btw they will surely come up with some weird stuff again, I'm not losing my hope there)

ThisAgio Sep 24, 2016 2:10 AM
Yeah... I'm so gonna miss that show!
Gimme back giggling at the transformations and the ridiculous twincest. Damnnn, now I want season 3
;A; 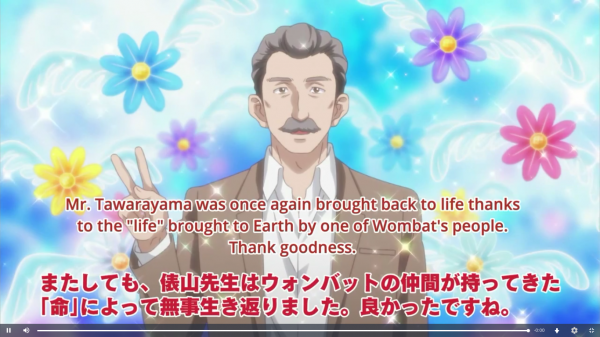 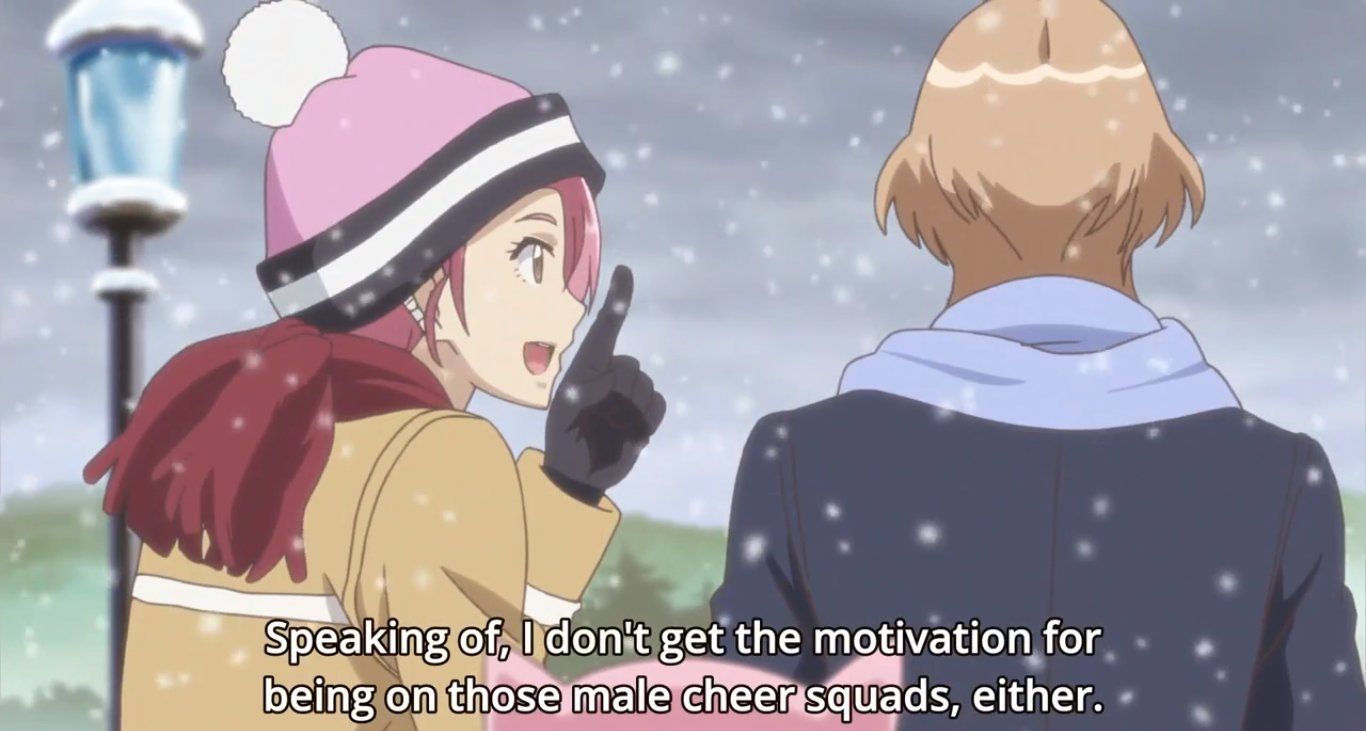 All that stuff about balls made the whole episode unreasonable. I don't know what they smoke every time they have to make one episode, but sure is some good stuff xD
Well, jokes aside!

The megane-dude is the funniest! He needs more screen-time! I love him since he's voiced by Sugita Tomokazu, he's one of my favourite seyuus and most of the times he voices ridiculous characters... Let's hope we'll be hearing more of him! Cheer Danshi really deserves lots of love.

Ahhh, too bad for Shirokuma's subs! I'm a total mess with Spanish, like, my level of knowledge doesn't go beyond introducing myself ^^"
If I don't find anything in my language, I suppose I'll have to watch them and pray to catch at least a word.
Otherwise, 50 episodes will teach me Spanish for good.

ThisAgio Aug 3, 2016 10:46 AM
The twins are such an ambiguity. Last episode, about chest hair killed me. What's going on?! How could someone come up with that script?! x''D
It's all about -not so subtext- incest. They are so ridiculous! ♥

What do you think about last episode of Cheer Danshi? It's turning out good!
Ah! I've noticed you started Shirokuma Cafè! How is it? I was searching for one with English subs but couldn't find it D:
I'm not really fond of dubs... @_@

ThisAgio Jul 30, 2016 3:17 AM
Oh, no, don't worry ^^"
I've been late on answers recently, too many things to do and so little time, but, that aside...
I'm always looking forward to Binan episodes! and whenever the twins appear i'm laughing for no apparent reason (okay, there's a reason, they're just so ambiguous you can't help but laugh) and i remember better their transformed names that their real names; but that's just me.

Cheer Danshi is just so good, I hope they won't go on and spoil the animation like they did with Gyakuten Saiban from the start. It'd be a real shame DD:

ThisAgio Jul 17, 2016 12:59 PM
i know that feeling... the waiting is unbearable! D:
I'm following most of the airing anime this season but meh... it's so difficult to keep track of them all... so long, Cheer Danshi is one of the most appealing!
You're watching Binan Koukou too? God, the transformations... I feel like I got back to elementary school, despite back then there were magical girls getting in pretty dresses... oh well, it's nice, but the twins fanservice is just too obvious ;-;

I was trying to be patient for each season to complete first as it was ongoing, because I wanted to just relax and watch the seasons all the way smoothly and in result of binge watching. I've always gotten some sort of goosebumps or hyped or any sort of emotion from the anime. It's some real shit.

You're perfectly fine, as long as you're enjoying yourself.

I agree, Haikyuu's second season was indeed better. I'm sure s3 will probably have a lot more suspense than it had already built up in the second season. When Kuroko ended, I honestly teared up a bit. LOL.

I don't usually like reading an anime's manga if I've already watched the anime, even since it's basically the same thing that's featured in the anime and I don't want to read what I already basically know. Unless I read the manga before the anime is out or before watching the anime in general, then I'd probably be alright with it. However, reading it before watching it is always a failure on my part. However, I did finish reading Orange and then didn't realize it came out to be an anime a bit later, which I was actuall excited over to see in action. I enjoyed the manga, because it was actually clean and a decent storyline.

I shall be your new best friend. Let's start this friendship. LOL.

Carv Jul 11, 2016 1:43 PM
Yeah, I can barely watch 25 episodes myself. Then again, it also depends the anime and on how good it is. If you're enjoying the anime, usually it smooths its way out and you'll forget about the number of episodes and actually enjoy the anime. I've witnessed that a couple times, so it is a good feeling. That happened to me with Haikyuu!!, but more with the second season, also Kuroko's Basketball. I wish there were more of Kuroko...

I feel like Doukyuusei is better more in an anime than actually reading it in manga, it's just more messy in my opinion. I mostly skemmed through it, because it's happening exactly in the movie. I've started Super Lovers manga as well, so far 12 chapters in. It is basically the same in the anime, so I also skemmed through that until after the chapter of the first day that Haruko came Japan. So far the story still seems slow.

I am looking forward to the third season of Haikyuu!! as well. I've saw some parts of the manga, and even some believe the illustrator for the manga could be an excellent horror genre. LOL. I've actually never heard of Hibike! Euphonium, but now I'm interested. I'll probably add it to my 'Plan to watch'. Your friend needs better taste if she doesn't like it LOL.

My day just started a bit. I made coffee and started playing a bit of GTA V, and now I might start catching up on some more anime or manga. Just trying to enjoy my day off before I go back to work tomorrow.

Carv Jul 10, 2016 8:43 PM
I just finished the manga of Doukyuusei, and it's basically the same exact thing that was shown in the movie except for like one scene. So basically not really anymore to it, but I did wish it were a show and there was more to it. I enjoyed it a lot. I'm going to try reading Super Lovers manga now, and catch up to it. I'll let you know what I think.

Reading is worth the pain. LOL. A good feeling is when you read a manga you enjoy and then find out it is coming out to be an anime. I've never experienced that until after reading the manga Orange and now it's an anime. Some find it dull by just the first episode that just came out, those who haven't read the manga, but it's just the first episode so can't really judge it yet. I've read the Hybrid Child manga I think before I watched it, or the other way around.

I've started watching Re:Zero like 4 episodes in, but then stopped and I'm going to wait until it is completed before I get further in it. It's different and interesting, so I do like it so far. I've been rewatching Sekaiichi Hatsukoi, 2 seasons, specials and the movie with my boyfriend. He hasn't seen it and he just made an anime list today, so I'm helping him get into anime again and just spending time with him by watching the anime with him. I'm also watching D.Gray-man on the side, a friend of mine has begged me for awhile to watch it, since it's his favorite anime and such, and I suppose another season just aired, so I've decided to get into it. It's actually not bad at all, I'm going to keep up with it. I honestly expected it to be dull and I wouldn't get invested in it, even since its 103 episodes and I ain't much of the type to keep up with large amounts of episodes, but it'll do. I believe it's worth it. I'm also watching Orange, it's ongoing and I usually wait until animes are completed, but I really enjoy it and I've read the manga anyways, so I won't be too impatient for the next episode. My boyfriend wants to watch Haikyuu!! after Sekaiichi Hatsukoi, and I've already watched it, so I'll be rewatching the first and second season of Haikyuu!! as well. LOL. Each season is like 25 episodes long too. Shiiett.

How'd your day go, by the way?

Carv Jul 10, 2016 1:49 PM
A friend of mine spread the news to me and we were excited about it. Well, any Yaoi anime coming out I'll be excited about it. Even for the Doukyuusei movie, which I haven't read the manga but I feel like I should. It's really good, I enjoyed it. I feel as though for Super Lovers, they're doing a year to probably continue boosting up the manga to be able to follow up smoothly with it. I need to read the manga myself, but I know I've read it before and read a bit of it, but haven't really caught up on it. I know the concept though.

I'll check out the manga, I've been slacking on manga more than I realize on these shows. I've got a lot of work to do, haha.

Yeah, I noticed that to, the art getting better. The art on the manga was also pretty bad, but I'm sure it gets better over time. I've watched and read Hybrid Child. The anime was good, I enjoyed it. Especially the Samurai story. I have a thing for Samurais...

What anime are you currently enjoying?
All Comments