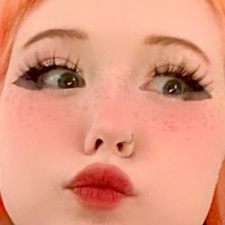 Nubiellee Nov 20, 2019 5:16 AM
I watch a lot of airing anime right now. You can look at my watching list. <3 I also finally started watching Devilman crybaby after ignoring it for months because a friend on here told me it was awesome. I really like it even if it's pretty different from what I usually watch haha. I also love the soundtrack. Do you listen a lot to anime soundtrack by the way? This one is my fav at the moment.

Xelecus Nov 19, 2019 8:51 PM
I see I see. I may download CS:GO before the semester ends, I might try it up when I finish the exams and return back to my country in the winter vacation, or I’ll play it in the beginning of the next semester, we don’t do anything in Uni in the first week of each semester tho lmao.

Okey Doki, but tbh, If I have the enough money, I’d either buy WoW first – Cause I’m a huge fan of Warcraft franchise – or Just buy BDO TO STALK MY EX-CRUSH WITH HER NEW BOYFRIEND. UGH Because of the visuals of course.

I got your point. You’re kind different than me about this, Despite that I love both Camera views, but I prefer the one from the top tbh. The first person camera sometimes scares me, Like, playing in peace AND SUDDENLY A WILD PLAYER APPEARS IN FRONT OF ME AND THEN I SCREAM. Lmfaoo, probably cuz FPS games attract males the most. Like Football games. So I think it’s a unique thing that a female loves this kind of game hahaha.

What actually makes me love Crossfire, the game you dunno, is that it has also PvE modes, you team up with 3 other players in maps, killing zombies, mutants and scary creatures, until you meet the boss. So it’s a lot of fun tbh, Some mutants appear in front of you out of nowhere and they run fast and you have to kill them fast cause you mainly have 1 life only. There’re also some other modes, like that mode where 16 players meet in the same map, after 30 seconds or something, half of the team becomes Mutants, the others are Humans(Soldiers), Mutants have to change Soldiers into Humans – Before the timespan ends- Or Soldiers kill all mutants, which is so difficult, so you have to mostly Hide until the timespan ends to win. So yeah it was a very interesting game. Many modes were there.

Well I know only few games genre, MMORPG, MMOFPS – not commonly used -, MOBA, FPS, (J)RPG, RTS. Ah actually, Overwatch is MMOFPS, specifically, you can just say FPS. I don’t know the reason actually, but I always knew that Overwatch is a FPS game. so I ended up searching on google in order to get a better explanation, and here it is : https://medium.com/ardentunited/overwatch-a-moba-or-fps-79600691b007

The only 3 MOBA popular games in the market now – PC platform – are League of Cancer, Dota 2 and Smite.

LMFAO WTF. That’s a thing I knew back then since 2014. But I can’t judge you, I started to watch anime since 2006 and knew about the seasonal animes since 2014 sooo ….
Oh yeah NNT s3. I want to watch it but I’m hesitated a lil bit. People are calling this season a trash because of Studio DEEN. The previous studio which made NNT splendid was called A-1 Pictures. Studio Deen always fuck up animes so Idk. Quite scared from watching it, I don’t want to hate one of my fav. Animes at all ;-;

*cough cough* ACTUALLY, I want to watch 11 animes from this season only, sounds insane right? Especially that Uni is consuming my life and exams are knocking my door to rape me. I already watch 3 animes from the previous Summer season also, so 14 animes in total. TILL THIS MOMENT, out of the 14 animes, I caught up with 9. I’m going to watch the 10th by tomorrow. Guess that I did a huge accomplish, amrite ? The animes that I’m watching/planning to watch are :
Fall Season : Babylon, Beastars, BnHA s4, FGO Buttlonyia, OreSuki, Cautious Hero, No Guns Life (Unwatched), NNT s3 (Unwatched), Blade of Immortal (Unwatched), SAO s3 p2 (Unwatched)
Summer Season : Vinland Saga, Dr.Stone, Fire Force.

GOSH, I hope that I finish all these animes by the end of the year, If I finish my semester early, I can binge watch them – or will the semester finishes me first? Idk -

Futagokoro Nov 18, 2019 4:38 PM
that sounds like a lot of fun but also time consuming
are you a full time streamer?

i’m really into music, i play piano, violin, guitar and a bit of ukulele and i like to sing

Mhm Mhm, only if I have more money I’d be able to buy it for sure. I want to try ESO, BDO, WoW and FFXIV. But yeah, it’s only a dream lmao.

I can understand you 100%. League of cancer – Despite being a very successful game – YET it has one of the worst playerbases ever. Sometimes it’s boring yeah. But it doesn’t happen to me often, the issue is that it consumes a lot of time. Like 1 game takes 30 mins as avg.
Well, the other games are old ones, but they’re kinda dead now so ofc you won’t hear a lot about them lmao.

Ooo that’s surprising. Crossfire is supposed to be a worldwide known MMOFPS game lmao, It has many versions in different languages even – For different countries -.
AHAHAHA well well the online FPS games are mostly called MMOFPS, because you can only play multiplayer / via internet connection. Whilst the other FPS games, you can do both. Story-line mode or just play against other players. – That’s what I know tho, maybe I’m mistaken, since that I’m not a huge fan of FPS games lmao -.
Mhm I’ll try to buy it one day for sure ! Oh also, are you going to catch up with seasonal animes or just old ones ?

Nubiellee Nov 18, 2019 8:13 AM
This one right now. >:3
https://myanimelist.net/anime/season
But now that I look at it I remember that it's full of sequels haha. Spring and fall had a little less I think.

Nubiellee Nov 18, 2019 4:30 AM
I'm a little curious. If you don't mind me asking, I see that both Naruto and Naruto: Shippuuden are in your watching list. Are you watching both of them at the same time? Isn't Shippuuden a sequel? D:

Xelecus Nov 15, 2019 7:33 PM
Oh FPS games then, the online ones (MMOFPS) like Overwatch, Paladins, CS:GO, Apex Legends or the normal ones like CoD and BF ?
Ah Elder Scrolls, I wanted to try this game always but .. *looks at his empty wallet, gives a lil sob*.

Well, since that university is butchering my social life, and I'm not used to live alone to take care of the housework, so I'm only playing League of Cancer Legends from time to time. It's a MOBA game. But I was playing Aura Kingdom and Elsword as well. I downloaded also Dauntless and Blade of Soul buuuut, no time at all. Guess I've wait to finish this semester at least to be able to play again - or will this semester finish me first? Who knows -.

Anyways, I think that the only FPS that I've ever played was Crossfire. If I can recall it correctly, it was from like more than 6-7 years ago. Never tried to play any FPS after that, but I'm kinda interested tbh, Unfortunately, I lean a lil bit to play MMOFPS, especially if it's PvE (A team vs monsters or something).
All Comments