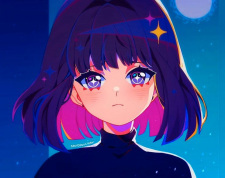 seulkennerz Aug 2, 2020 7:30 AM
that's good! I feel like a lot of people's first anime was ouran host club xDD I believe it was one of my first few anime~ My very first anime was pokemon, I watched it as a kid without realizing it as a kid and then I watched some of the newer seasons knowing it was an anime :DD I've only seen 2 episodes of mr. love queens choice and it's very cringe and just funny, cause the revolver "powers" are just too funny xDD I'm waiting for the other 3 to get more episodes or finish, but I'm only 5 episodes away from finishing haikyuu to the top part 1, I've heard the ending made people frustrated 0.0

seulkennerz Aug 1, 2020 9:15 PM
That's awesome! what was the first anime u watched? xDD How are you liking Doukyuusei?

thanks for the fr! how are you? I see ur a fellow haikyuu lover too~ also I can't believe we have such a high anime affinity, that's awesome :DD

watching anything at the moment? also when did you start watching anime?