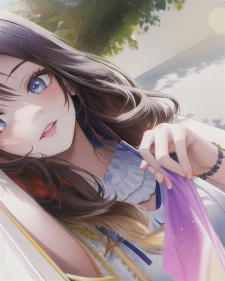 SSGSlayer Jul 15, 2020 11:49 AM
But if you ever have to watch a Fate series, then tell me definitely, I will tell you a good way to watch itрҹ‘Қ
Very nice to meet you

SSGSlayer Jul 15, 2020 11:43 AM
I am fineрҹҳү
i am currently watching Fate/Grand Order
actually I see this series for a very long time And this story is divided into many different parts

Fate/stay night
The story revolves around Shirou Emiya, a hardworking and honest teenager who unwillingly enters a to-the-death tournament called the Fifth Holy Grail War, where combatants fight with magic and Heroes throughout history for a chance to have their wishes granted. Orphaned and the sole survivor of a massive fire in Fuyuki City as a child, Shirou was taken in by a retired mage named Kiritsugu Emiya, who would die years later. His responsibility to those who died and his salvation through his father formed a strong desire for justice and peace in him.

The first of the three heroines, Saber is an agile and powerful warrior who retains her identity, hence her substitute name after her role as a member of the Saber class. She also serves as the route's servant protagonist. She was the victor of the Fourth Holy Grail War with another Master and claims to be the strongest out of all Servants in the Saber Class. However, Shirou is against Saber's constant aim for conflicts with other servants and instead seeks to ally with Rin