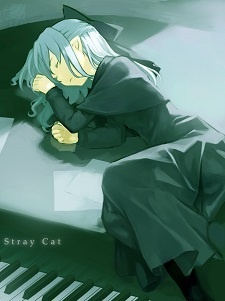 Black_Sheep97 Sep 4, 2019 11:27 AM
Yeah trying to be objective and analytical is far too tedious for me and I don't have the time. Plus I'm not smart enough for that.

Also thanks for accepting my request

Oh really? I didn't know that Cop Craft was made by the same artist that did Last Exile. That's interesting. ^^

Yeah, it's been a really good anime so far. You need to catch up with it soon lol. It's getting better and better with each ep imo :3. It's a shame that my sister still doesn't like it though. Oh well. Can't force her to change her mind about it. It's her opinion, after all. :/

OMG, Carole & Tuesday is a great anime! :D You should definitely watch it too. It's really worth your time. It's quite nice and relaxing to binge-watch as well imo. And you're right about people overlooking it, man. It's so underrated. People are missing out on a such really good show. T_T

Yup, Vinland Saga is also another good and amazing anime to watch too. But just like with Carole & Tuesday, it's also kind of underrated as well as being overlooked by some people which is a shame becausee it's hardly getting the attention it deserves now at this point as you can see. :/

Damn, what happened to them? Did you get rid of them or something?

Alright, thanks. I'll let you know when I can then :3.

Yeah, sure. It's just gonna take awhile though. Are you okay with that? :)

Hello :D *Best Friends Hug* YOU ARE SO LOVELY (^.^) I'm So Super Happy Right Now (^.^) Also A Few Days Ago I Started Replaying Zelda Ocarina Of Time For My Nintendo 3DS (^.^) I've Completed The Game Twice Before ^^ I've Just Gotten Epona The Horse After Leaving The Temple Of Time As Adult Link (^.^) *Happiest Video Game Lovers Hug* Also I Absolutely Love Trying 2 Do Cartwheels And Handstands :P Even Though I'm Not Very Good At Them ;) I Wish My Legs Kicked Higher :( And I'm Super Excited 2 Tell You What I've Tried Today ;) *Super Excited Hug*

MonkeyDnatsu Aug 7, 2019 5:31 PM
I just make small clips of gaming vids and i like watching prank and video games videos. But i dont record my voice, i have a caribbean accent so it's kinda hard to understand lol