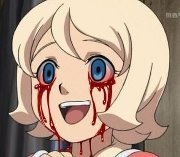 moe_sama Feb 3, 10:00 PM
Even as someone that enjoys moe enough to name my profile after it, your review on Clannad has every piece of legitimate and valuable criticism of it and Kanon that I could never quite put into words myself. I hope the mods stop giving you a hard time about it.

From one guy that loves metal to another, here are some of my own recommendations:
Polaris
Crazy88
We Are Knuckle Dragger
WOLFTOOTH
Tallah

MartialCanterel Sep 28, 2019 12:48 PM
I decided not to watch Hachimitsu to Clover after I saw your review, hope I am on the right track..

szny Apr 16, 2019 10:40 PM
How kinky.....very impressive.
haha, I understand, Sir. Fun fact, as a child, in environmental education class, when we'd be taught about things like population explosion and stuff, I'd often wish someone would come and start randomly shooting people. I definitely thought that that was the only way of controlling population growth, I still do to some extent lmao. So, if you wanna go around killing people, I'll be sure to back you up <3!
wow, I'm surprised you know about that. That seems to have gotten a lot of international attention.
Well, what happened was that there was this terrorist attack in an Indian village close to Pakistan, a place that has been constantly claimed by Pak. The Indian government says that the terrorists were from and are still in Pakistan, but the latter is not willing to hand them over. So uhm the general Inidan population started agitating (more like going crazy) and asked for "justice". They wanted war at all costs. A war didn't actually take place, but there were pretty high chances of it at one point, and the media kept encouraging it.
Indians who dared to say anything against it, even on social media, were instantly jailed, so I'm super glad I wasn't very active on the internet when all of that was happening. I'm pretty sure I would've been in jail too otherwise.
But I literally did believe, for a while, that I'd die lmao. China is an 'ally' of Pakistan and if there would've been a war, it would've surely helped Pak. And the area that happens to be the closest to China is Sikkim, where I live. It would've been truly sad had a bomb landed here, haha.

szny Apr 14, 2019 12:12 PM
ahaha yessir! I have no doubt regarding your claims.
I looked that book up, and looks controversial enough to peak my interest, haha. Will definitely order it sometime soon. I hope the book hasn't inspire you to kill people yet.
I do have that book, actually had it for like a year now. But I'm kinda not sure about it, because politics is something I haven't been super interested in lately. Might take some time for me to get to that. But if the movie is adapted well enough, do you think not reading the book will be okay?

szny Apr 12, 2019 11:19 AM
Chubby sure is a very interesting way of describing them :) You don't like dicks?!! I mean, I guess it makes sense. It's prolly like how girls don't like tits. Oh or maybe that's just me..haha.
Yeah, that should be it. The people around me who aren't into anime give the same reason.
Haha, that makes a lot of sense actually. I had that same mentality for about two years, lol. I think that's mainly because most people are accustomed to envisioning metal in its gore-ish, dark and loud form, like with uhm black and death metal, maybe?
Oh that sounds extremely fun! Watching stuff with you must be a very amusing experience overall. Too bad people have a problem with it </3
ehh you just seem to have a very pedophilic side to you, you might want to keep that in check <3
wow I hadn't even heard of any of those writers, except Gabriel. I checked a few of them out, and Bukowski does seem very interesting. Any of his books you'd recommend?

szny Apr 12, 2019 12:35 AM
ahh that's a shame, kind of. Dicks are pretty fascinating. And aren't men supposed to play those 'dick pranks' where you pull each other's stuff ......haha, I sure don't know what I'm talking about.
Ahh makes sense. Anime is surprisingly popular in India though. Everyone atleast knows about it, and people easily admit it. It's almost a thing of pride here, which must sound understandably absurd. But you think you'd enjoying watching anime with other people? Or would that kill you inside?
Our school uniforms are actually very close to japanese ones, just with slightly longer skirts, so the affinity might just grow!
I wouldn't mind a sadistic dictator, tbh <3
Haha, yeah true. Being open to things is indeed very important.
Wow you're rude lmao. My heart is very feeble, you see, so you might want to be a bit more careful next time </3
"What sort of books did you like then?" a question I asked the last time we talked. I'm still curious!

szny Apr 11, 2019 11:47 PM
Ahaha sounds like a plan! and well, I'm not gonna lie I don't mind such boners in hentai/doujins, but irl, it might be a problem.
Oh that is a little surprising. Is anime supposed to be famous in Greece? And Elfen Lied? That has become something I need to rewatch asap, I'm not really sure about how I feel about it. But do you still have friends who watch anime?
I had a look at your ratings, and you seem to have liked K-On. That makes me very happy, haha! But our affinity is -29.6%, how sad is that!
I will follow your orders and wait til after college to feel truly suicidal, haha.
I also noticed the music links in your account, and I'll be sure to check those links out with the monthly updates!
And yes, of course i did! I missed talking to you daily <3

szny Apr 11, 2019 10:55 PM
Wellllllllllll, I guess so. Maybe lol
So uhm, you're dying either ways? Sounds pretty tough. You think things are ever changing for you?
That's very surprising, but understandable. You binged for 4 whole years?! haha. what got you into anime anyway, since you seem to have gotten into the media pretty late?
HAHA! Don't worry, I always feel like a 2-year-old when talking to you, so I guess that makes up for it? And well, I surely am not married yet, but I have had a dog for the last 3 years, can't seem to be getting bored of that small ball of fur anytime soon <3
ehh, college will be next for me, stressful jobs will have to wait.

szny Apr 10, 2019 10:22 AM
haha, wasn't really expecting you to be 'very very glad', so that's a very very pleasant surprise!
And that's okay, I won't mind delayed replies at all. Please take your time, I can completely understand. How has your health been? and how has everything else been?! and have you been anime a lot? by the way, do you usually binge shows?
things have been pretty uhm, boring for me, to be really honest. i'm finally out of school and staying home just makes every day feel like a year, very boring haha. i have been trying to utilize my time in a more productive way though.

szny Apr 9, 2019 8:47 AM
'Thanks for your kind words sir and for taking time to read my drunk ravings. You know, it's been so long since i saw the damn thing that i can't remember why i didn't indeed give this the ebola rating.
I had to re-post the damn review cause someone here at MAL named Jack(shit) thinks it's a good idea to remove my reviews every now and then..But i'm like herpes so i keep on coming back.
Back to Clannad i'm sure there were some good things about it...Or that's what i would say if i liked slicing my wrists to give my life some meaning.'

Still a fan of everything you write, ngl <3

szny Feb 6, 2019 9:26 AM
Oh that's quite a surprise. I used to think that Greece is like Japan, holding on to its culture and language real tight haha. Ahaha so you know a little of french too then? You're not 50 yet, dw. Also, if english is given so much priority, why aren't your friends well acquainted with the language??
And the English frenzy exists here (as well?). Also why everyone's so crazy about getting better at it and showing off. It's a real shame imo.
80kgs? Wow. I hope I'm atleast half that weight. What sort of books did you like then?
You were very lucky it seems. I mean, not everyone gets those chances.
Haha I guess I agree. People don't try enough. But I don't think that problem will persist for very long. Because other than our brave Christian men, most people have started giving marriage more serious thought.
The pussy clouds must've been tough to get rid of!
I hope you've been doing well :)

szny Jan 29, 2019 1:46 AM
Ahh that's understandable. English is a pretty convenient langauge. Would have to be easier than most. Greece doesn't "promote" English a lot, does it?
Wow that's all just so surprising. Here I was thinking you were born an Alpha male. So you worked to develop those qualities, huh. Gives me some hope, surely. Welllllllll let's hope for the best!
Almost a decade? Wow. You started working super early or something? You must have really been talented. Quite impressive, I must say.
I don't think that's bad necessarily. I have had people tell me how boring it can eventually get. Plus, I see failed marriages so often that it all just makes sense. But engaged twice? Lol. That's quite bizarre. I feel bad for the girls tbh. Haven't you considered an open relationship or something??
Haha I've always found the twitter interface a bit too messy for me, but I should definitely be there. Soon, soon. Experiencing the jungle is important.
By the way, even though I should probably never apologise to you(since you don't have siblings), I want to apologise one time in advance, since I think I'll be off for a few weeks and my replies will get severely delayed.
All Comments