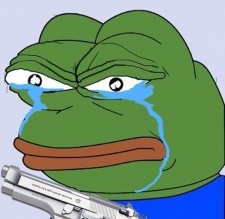 Hollweg Jul 21, 2018 1:56 AM
It took so long for me to read Bradherley that I even forgot to reply to you, sorry. It wasn't what I expected but in a good way. Those poor girls.

How was Zetman by the way? And thanks for the new recs.

Raging_Berserker Sep 25, 2017 8:38 PM
Meh it's all good, I think it's about understanding. So how are you these days? I been travelling around, so I didn't get the time to visit here for a while. How's it going?

Raging_Berserker Sep 20, 2017 4:13 PM
What you just explained as 'those that aren't based off anime or manga', I'm sure they're called 'original anime movies'. I highly think saying 'one shot movie' doesn't actually make any sense. Live action 'movie' means it's gonna be a movie with real life settings and acting I think, so there's nothing like 'live action anime movie', the correct term is simply 'live action movie' based off whatever you wanna call it.

Well that's both good and bad. It's good because the ass is beautiful, I'm proud to call myself an ass-man. I mean, I was drawn into it uehfvreuf bah! Anyway, moving on, it's bad because it's anonymous. Won't you ever put yours for me to see? I guess I can predict the answer, but, you can't blame me for asking. I am interested in seeing your bottom after all. Eh, I'll keep quiet now haha.

Hollweg Sep 19, 2017 5:51 PM
Weirdly enough I never heard of this one, will give it a read sometime soon, then report back to you, thanks for the rec

Raging_Berserker Sep 17, 2017 8:38 AM
Whoa, hold it! Hold it!!!! Gaddamn, I said hold it!!! DawnYamada getting naughty already? I didn't expect that. You feisty girl, I like it. Speaking from genuine experience, that list is only gonna get thicker and longer lol. Be careful though, too much of that good good causes damage. Welp!

Hmmm live action or the one shots? Huhn?! Wait a minute, at first, I thought I understood what you were asking. Now that I think about it, I don't haha. What's the difference between a live action anime movie and a one shot anime movie? Blade of the Immortal? I tried watching the anime for that once, the pace didn't feel right, so I decided to go no further until I read the manga. It's still on my own PTR list, damn.

As for me, I haven't been hot on anything. I dabble with mangas and manhwas, as you can see. I've reduced on my TV movies and series watching in general for ages now. I do have a lot of anime movies to watch, but I wonder when I'll get to watch those.

Quick question: Is your profile accurate?

Hollweg Aug 13, 2017 7:13 PM
Glad you liked it, I was like "shit, she detested them" because you didn't reply haha
thanks for the recommendation, I don't think I've seen this manga before, will give it a read when it's completed (I usually avoid reading stuff that isn't finished because my memory is the WORST), I hope you don't have this too given the insane amount of manga you're currently reading :')

Raging_Berserker Jul 21, 2017 9:47 PM
No probs, thanks for accepting as well. Your profile pic is hilarious hahaha.