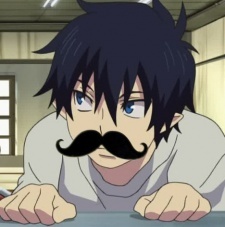 IceQueen Jun 14, 2016 1:50 PM
Yeah, I get this "more experience" answer all the time too. If no one hires you how are you supposed to have any experience at all? It's really absurd..

I truly hope things get better for you :)

I'm sorry to hear that, I hope you are okay *hugs* I went through a pretty bad breakup last year too. I'll be moving to Edinburgh in September probably to do my Master's degree. Things are kinda tough in Greece in general.

Wiz_Kaleb May 25, 2016 10:04 PM
I'm really sorry to hear that. I hope things get better for you and that you're able to get a better job. I don't really know what to say except to keep persevering and hopefully something will turn up. Compared to you I don't have it near as bad. There's a lot of things that frustrate me about my job and the drama that goes on is ridiculous but at least I have a job that pays my car/rent bills. Do your best to stay positive!

Kabaneri is still really good don't get me wrong but sadly it's no masterpiece and I can't say it's the next "Attack on Titan" of anime. Uggg Tokyo Ghoul -_- I watched the first one and I liked it although the story direction had a lot of problems with the way it would skip around. Secon season I heard was pretty bad and completely derailed from the manga. Honestly they probably should have gotten a better director and possibly even a different studio for this show.

Well peaceful animes can be beautiful and amazing. Aria and Mushishi are examples like you said as well as Natsume's Book of Friends which is a fantastic series. Surprisingly enough Flying Witch kind of makes me think of Natsume because it's supposed to be this supernatural slice of life but it's nowhere near as good. Everything about Flying Witch is just really dull and while it is peaceful it doesn't have any beauty to it. And again, for a show called Flying Witch there's a lot less supernatural/witchy stuff then what I expected to see.

Right now I'm watching Yona of the Dawn because my sister highly recommended it to me and said I "HAD" to watch it as soon as possible. So far I've been impressed and am really liking it. It's nailing the adventure story perfectly and it's really interesting. It's had good character development, cool action moments, and it teases you about the awesomeness that's going to happen in future episodes. After I finish this show there's a couple more currently airing shows I want to start like Haven't you Heard, I'm Sakamoto, and Re. Life in Another World.

That's really convenient because I can see myself playing it and giving up easily after all my favorite characters die.

Academia and Kabaneri are both really good although Kabaneri has a few issues. With Kabaneri it has a great setting, good main characters, amazing artwork and animation, super cool action sequences, and neat looking side characters. However the downside to all of this is that the story if there is one (literally stuff just happens and that's been it) hasn't really gone anywhere and nothing get's explained. You get more information from the series description than the actual episodes, I'm not kidding. There are so many things I want to know but it never get's explained. And while the side characters look really cool they get no development what so ever and it feels like they're entire point is just to look cool. It's a shame because if the show didn't have those problems or at least had a better and more detailed story this show could be definitely be a runner for best show of 2016 in my opinion. Regardless though it's very enjoyable and still one of my favorites for the season.

Academia on the other hand doesn't have any issues really except that it's only going to be 13 episodes long -_- The show so far has been great and it's lots of fun to watch. Studio Bones is doing a great job animating it and there have been some really awesome looking action sequences. I'm caught up with the manga so it's really exciting seeing everything animated and knowing where the show is going and how good it's going to get.

I'm watching Joker Game too and it's really interesting like you said. One thing I would say though is it's very episodic and there doesn't seem to be a story going. The show just wants to give you a look into the lives of a spy in a WWII setting. It's still good though and I'm wondering if eventually there will be a story that somewhat ties things together.

The other show I've been watching is Flying Witch which is a "magical" slice of life show. Reason I put magical in cannotations is because while you would think it would be a magic focused slice of life given that there's witches and broomsticks, there's not much magical stuff that actually happens. It's really dull and not much happens. In fact in an episode I watched today, the only thing that happened was that the characters followed a cat around the neighborhood......and that was it. Occasionally something magical happens like a flying broomstick, a potion, or a screaming mandrake. But it feels like there's a lot less magical stuff than there should be. On the other hand I do admit that this anime is super peaceful although kind of in a boring way. It's not painful to watch and the episodes are pretty easy to get through. It'll probably going to be like a 4 or a 5 but I'll stick with it.

Anyways hope you're doing great! A quick update on the shipyard, they sent me an email saying that my application was accepted and they are further reviewing it. They're sending out phone calls for interviews so I'm hoping I get one soon.

I've heard that Fire Emblem is really difficult because it has the perma death thing in it. I'll be sure to check Gamestop in the near future to see if they have the game.

I haven't seen Gintama in a while (not since I was 14) but it's freaking hilarious. Some might say the humor can be really crude and ridiculous but I remember it being so funny that you're crying. Only thing I might say about it is it's primarily an episodic series and every now and then you'll have a mini arc. The mini arcs are amazing for the most part and have great stories and action parts. I have noticed that with the latest Gintama seasons there's been more arcs and less episodic episodes which is what the first season mostly consisted of.

Ya my friend Rachel called it from early on and of course she was right. I thought it was a really intense reveal though and I loved Satoru's reaction to finding out that the teacher was the culprit. The ending was kind of ehh but everything else I'd say was pretty great. I loved Kayo Hinazuki's part of the story especially when she's with Satoru and his mom. That was such an emotional moment when she's crying because of the love Mrs. Fujinuma shows her.

To be honest I'm not a fan of Funimations streaming service. Every time I've tried to watch stuff on their site it never works. Most of the time their website won't even load for some reason. It's a little wierd but most of my anime I'm watching legally too now a days. I say wierd because before like 80% of the anime I watched online was on illegal sites like Animefreak.t.v and AnimeUltima. Now I'm watching on Hulu and Crunchyroll and really the only time I'll watch illegally (sounds bad when I say illegal but I'm not sure what else to call it) is if the legal sites don't have the show. I started a membership with Hulu recently and the ad free option is so nice. Hulu has a nice collection of anime and they get a handful of the new airing shows. (I think they get everything Aniplex, Sentai, and Funimation licenses) Ya Funimation really needs to get their site fixed, shame on them -_-

That's my only worry about this show is that it get's too Attack on Titany. From what I've seen there are a few parts that make me think of Attack on Titan but there's definitely nothing that makes me feel they're copy and pasting. The first episode was crazy awesome and I'm really hoping it stays this way. Next episode finally comes out tomorrow, I'm so excited!

I haven't heard anything from the jobs I've applied to either. Shipyard is understandable because they take forever with all the applicants but I doubt I'm going to get hired by the bank. I feel part of it is because it's a teller position and I'm a guy. Practically every bank I've gone to has an all female staff. Not that that's a bad thing or anything but I think that's probably why they wouldn't hire me. So I'm still hoping the shipyard will get back to me and schedule an interview but in the meantime I haven't found anything else. I'm considering college but if I do do that it'll be after I have my car paid off in July. Hopefully I'll find something soon because I want to get out of McDonalds and find a better career.
All Comments