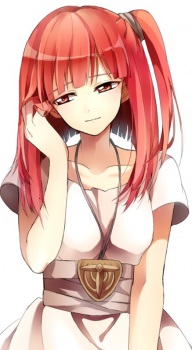 I think that Both have huge plot twists towards the end of the first episode -Both have a post apocalyptic setting -Both focus on kids trying to fight against the cruel world they've awoken to -Both create drama by making the main villains primary goal to eat humans, implying that we aren't on the top of the food chain in their world Both series include dark mysteries. Both are about survival. Humans against non-humans. In both series the main three characters are close childhood friends, bonded with something stronger than blood relation, and they protect each other like a family.

They both share the same characters; you can literally match the characters from both sides. The plot is also the same; humanity is on a brink of extinction because of a source they know very little about and now humanity is fighting back. If you liked Owari no Seraph you will love Shingeki no Kyojin!

A group of humans in seclusion who live in fear of a powerful race of monsters that they have managed to evade for a long time, who are suddenly forced back into combat with these creatures.

In order to to save humanity from the brink of extinction from a mysterious catastrophe, the remaining people have built a barricade around the area that they live in. In both series, only a few special individuals have the power to fight the monsters. While SnK is set in a medieval-ish world, Black Bullet is set in a futuristic one. Both MC are voiced by Yuki

Both have group of students and young adults starting up a band and both focus on the personal drama that being in a band comes with.

In both anime one of the main things is the fact that one person is protecting a person they love in a deadly competition and in both of them their is a group of people is gathered to try to kill each other to be the last one standing.

Story related to the technological world, which affects people and robots and both reminded me of each other

I recommend this show due to the central themes. Both are about humanity struggling against overwhelming odds against monsters. Both have organizations and solutions to deal with the problem. Also both main characters seem to share the trait for vengeance.

They both have a shy girl who has a crush on a stupid boy, both are comedy and fun to watch and have the same vibe of romance

Humanity is on the brink of extinction by a more powerful species. Main characters have a certain "power" that helps them fight Both are Masterpieces

Both consists a survival thrill during the events, while each charcter is followed by his own servant ( Instead of servants and Masters in Fate/Zero, There are Rozen Maidens and their masters )

Similarities: -Both had their male and female protagonists put up the "fake" couple act, but romance was still manifested... - Both had equal number of girls for the harem of the male protagonist -Three girls in the harem were childhood friends and one was not -Both possessed the same genre (Romantic Comedy, School Life and Harem)

Both have about the same art, the same director and kinda the same scenes and character designs in both the main character is a girl and a boy, and the boy helping the girl and all that...

Nana and Paradise Kiss are similar in that they're both done by the same producers. This leads both shows to have a similar "drama" appeal. You're not quite sure what will happen to all the characters, even all the way up to the last couple minutes of the last episode. Both are directed toward more of the "girl" market, but they're entertaining enough for any type of drama/romance fan.

It's hard to compare Giant Killing with any other football related anime because they almost play real football and depends more on tactics. So i think Kaiji is similar in more way's that one. But Kaiji is more darker anime but the two main protagonist from these anime's remind of each other maybe because they both have the same character design anyways in my opinion they are alike in a way