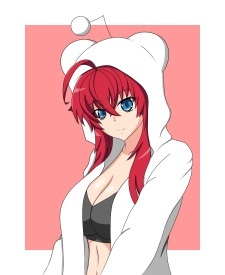 _simplethoughts Dec 7, 2019 2:45 PM
Cause people cast it off as overhyped garbage based on false assumptions they have for the series.

I know what you mean when you say you like fan service, but in it's place. You're right, when you're watching an action show or something a bit more serious and they suddenly add a titty grab, or fall over and land with the guys head on the girls panties then it just makes me cringe. I watch action/adventure for action/adventure and I watch ecchi/fanservice for tits n ass.

To Love Ru is my favourite ecchi/harem show period. Highschool DxD is ok but Issei annoys me sometimes, although I love his "grabbin dragon" catch-phrase. To Love Ru is an un-ashamed ecchi/harem show with a strong enough story to carry all the tits and ass. It has some great characters that people still fight over in the waifu wars now (I don't understand why people argue about waifu's, it's not like they can answer back, why pick one when you can admire them all, haha).

I'm not working atm, had heart surgery in Feb (2nd time in last two years) so I've got plenty of time to be watching anime. I don't think I've ever watched as much anime as I have been in last few months since leaving hospital, it's been great ^_^ When I go back to work eventually I'll be like you, having to cut down my watching and only managing to watch a few of the currently airing shows each season.

Danmachi is on of my favourite shows tbh and we've just had some great episodes. Bell was taken into the Pleasure Quarter where a Familiar of Hookers have their power base. As you can imagine there's lots of hot ladies and they all want a piece of Bell, being the cute guy he is, it's fun.

I'm enjoying Vinland saga too atm. Have you seen Vikings or The Last Kingdom on 'normal' tv? They're both about the same period in history with a similar cast of characters (ie Danish & Viking attacks on England in 10th & 11th century). I loved these shows so when Vinland Saga started airing I was hoping it would be good & its exceeded my expectations.

23feanor Aug 29, 2019 11:12 AM
Was checking out your mal & noticed your haven't specialised it yet. Here's a link to a youtube post giving you details of how to use premade formats. I only found out you could do this the other week and wish someone had told me. Hope it helps:
https://www.youtube.com/watch?v=FeYbQEpf0l0&list=PL4279A6C706BF9F12&index=118&t=482s

I made my profile by myself. I used microsoft word to upload the pictures of anime series & characters that I found off google, Pintrest, D-Art, etc. I'd sharpen images and recolor them & add black borders to define them. Lastly, I'd use IMGUR to upload the photos to convert to BBC forum for myanimelist.

If you want me to design your profile I'd be glad too so long as you reference me.
Also keep watching YYH you're about to enter the Dark Tournament Arc! (Best Tournament in anime)

Mythologically Aug 20, 2019 11:58 AM
par·o·dy
/ˈperədē/
noun
1.
an imitation of the style of a particular writer, artist, or genre with deliberate exaggeration for comic effect.
"the movie is a parody of the horror genre"
synonyms: satire, burlesque, lampoon, pastiche, caricature, takeoff, skit, imitation, mockery