Saladlegs Jul 2, 11:21 AM
I am so bad at Touhou I can't even beat it on easy mode with using all the extra lives. Playing Touhou 9 is interesting because it has multiplayer, a split screen kind of mode. It's fun to compete against a friend, even if they're much better than me. 6, 7, and 9 are the only ones I've played. I would like to try the later ones though because there are a lot of character designs I like from the later games.

I've always loved Mini Coopers they are small cute cars, and they are fairly unique in that aspect (besides Beetles), I also prefer more rectangular cars as opposed to the curved designs most modern cars use now. The Station Wagon looks charming in an odd way, it's very long. Any car is better than no car regardless. The retro Volvo are beautiful, there's a lot of diversity in the designs but I like the long boxy looking ones. I don't necessarily have a dream car, but I would love to have anything besides generic rounded sedan/suv.

I would love a Vespa, but sadly that kind of transportation doesn't really work around here. It's mostly built around people having cars. I could never get into skateboarding, so dangerous for my blood.

I also picked a stupidly large work load for my senior year, though not entirely my fault. I think it will be fine though, if a little painful. What are you going to school for?

I actually enjoyed Boring Girlfriend quite a bit. I thought it was directed well and the animation was great. I was wholly surprised when I looked and saw it was an A1 show. The dialogue was engaging too, reminded me of Monogatari. The "plot" parts seemed the weakest but I liked it. I actually starting watching it solely because I was interested in the film. I hope it keeps up the quality throughout the two seasons or else it'll be a slog to get to the movie.

Saladlegs Jun 29, 11:10 PM
The music is pretty good too. I have a friend who 1CCs it and stuff, but I've never been able get past 50% of touhou 6. I just shmups just aren't my type of game. Touhou Lunar Nights is a lot different and more my style, I'd recommend it. I was trying to find the same of my favourite Touhou but I can't find it ("favourite" I can't even remember the name") Touhou is peak otaku though, I think culturally vtubers are in a similar area which I've been invested in.

Congratulations on your graduation. Finally over with and onto another chapter. And yes, I am going to be doing my final (hopefully) year in September. Gonna be rough I think. I don't know what I'll do after. Congrats on your license as well, I'm nearly on my license, just waiting for some road tests. I was actually looking at buying a mini cooper. There's one around me for about ~$3000. Been thinking about getting a job too, I hate the idea though. Moving to the city is very exciting. A chance for independence and all the luxuries the city provides. It's a time of change.

Saladlegs Jun 29, 9:07 AM
She sure is. I love the Touhou designs and the culture surrounding it but I'm so terrible at the games it's hard for me to get into it.

I've been okay, haven't been watching much anime but that's nothing new now. Hopefully that'll turn around sometime this summer.

Long time indeed, sorry about not responding to your last message. I wasn't feeling well enough to respond at the time and put it off until it would be too awkward to respond to. So apologies for that. How have you been? Graduated by now I imagine. 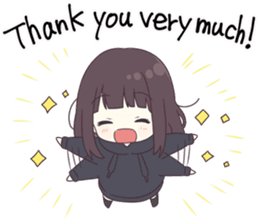 SullivanM May 23, 7:09 PM
thank you for accepting * _ * your favorites are also very good, especially for having cowboy bebop included

Kakubyakuin May 23, 5:55 PM
^u^ nice to meet you. Besides her cuteness, i like her character building from normal girl to the best girl and main heroine of the show :)

unimportantuser May 9, 1:41 PM
Yes, Bakuman is immaculate with it's dialogue, characters, story, artwork, & how everything ties together was great. I do wish we actually got to see the wedding between Miho & Moritaka. But I can't let that take away from the fact that Bakuman is now my 2nd favorite manga, & I'm very excited to read anything else Takeshi Obata did the art for. I'm even interested to go back to Death Note now because of how amazing Bakuman was

NoktoH May 8, 7:45 PM
I'm really enjoying it so far. A lot of the references go over my head, but I still find it pretty funny and it's nice seeing all of the Haruhi references. It really goes to show just how popular it was at the time. I like all the characters as well, just a really pleasant show to watch overall.

NakolHira Apr 13, 6:03 AM
Oh hey!
Deactivated my twitter, I have a very important exam coming in June so wanted to stay away from twitter 🙂 and anime 🙃 though the later one is difficult 😷
All Comments