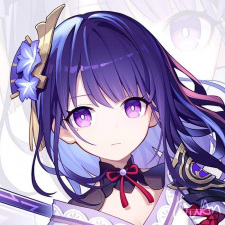 Actually I don't play Genshin tho thinking about it. Hbu? :3

I don't play it these days either, but I can't help liking, and sometimes drawing, some of the characters in it. They are totally gorgeous~ :3

SweetKiichigo Feb 13, 2020 5:59 PM
Oh nice, did you take pictures?`
I haven't gone hiking in a while. I'm always scared of seeing like mountain lions or snakes.~ But i enjoy scenery when i can ^^

I like that BanG Dream main screen. Makes me want to go back to tha gamu^^

Been a while since we last talked. How have you been doing?~

EGOIST Oct 25, 2019 5:25 AM
I don't even think I played any games this season apart from the start when I got interested with the new midseason mechanics but didn't really bother anymore because too much tilting isn't good for my mental health XD. Wow, it seems like they're really trying out a lot of things on the new champions they're releasing. I get the feeling that their kits are so overloaded already compared to Yi or Tryndamere and it's all skill shot based nowadays. Damn, S10. It feels like yesterday when I started on S5 and played almost every chance I get. Yeah, I'm glad the game still has a growing community and hasn't died down as much as fortnite did (RIP).

Damn, SKT. I watched some of their games when Mata was their support and I'm surprised just changing him for someone else had a significant improvement on the team but I want someone else to win XD SKT and Faker already cemented their legacies in the game, I hope an underdog team would win. That's going to be a one epic storyline but the chances are slim. NA is out of groups again a huge stepback after C9 got out last year. Doublelift just can't seem to catch a break

i'm usually really prompt with school and stuff but it's been really boring recently so i've admittedly been slacking a bit >.> but yeah i've been watching anime in public a lot more recently, especially in school XD

EGOIST Oct 20, 2019 12:32 AM
Indeed, but I think my interest has piqued again with the announcement they made for Riot's 10th anniversary. I'm gunning to try them all out even if it's Tencent. Welcome to the club XD, maybe the new installments to the franchise can give back the spark in your eyes. There's even going to be an animated series for the champs which is a huge one! I've always liked the lore and origin videos they pump out once in a while so I'm super stoked to try out the adventure rpg the most to see what it's made of and of course the series.

How about you? Looking forward to any of their planned installments? :) and it's World Championships time again who do you predict will win? I don't really watch the matches these days due to being busy with some other things but I've checked the recent match histories and seems like G2 and SKT are looking hella solid but I really can't predict who'll win since I didn't really watch any of the games.

yeah i have him to thank for getting me into games, which is what got me into anime too XD

they're all adorable i actually love them XD i was actually nearly late to school this morning because i lost track of time while watching it >.>

speaking of which, i watched some lucky star during math class today which is a highlight of my year thus far XD