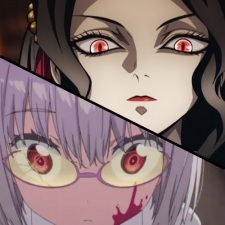 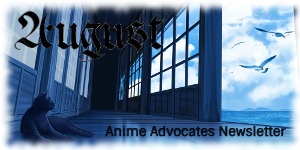 August ends, and this marks our 5th newsletter! During the previous month we have hit a milestone of 300 members with 'SadDreams' being our 300th member, and so they will be known as '300th member' from now and on forever. Maybe you should feel sad for them kill me pls. Though, despite our never ending growth, we still face problems with activity on our 'discord'. Where did everyone disappear to?

We finally started giving out member cards. The cards were made by 'Desu' the traitor and can obtained through 'this forum post'. Hurry and grab one, to be a true anime advocate! (Kanna best girl)

More people leaving our staff. Not surprising, is it?

Both of them quit on their own accord. Reasons being that they are busy and can't find time or are leaving for another club. Desu will still be doing the Official Member Cards, so don't worry about that.

Horrible news! Our club owner, Sterps, has been banned from MAL! Please take your time to sign 'this petition' and make MAL notice what terrible mistake they have done.

As always, we feature some conversations that happened over at our 'discord'. Read at your own risk. 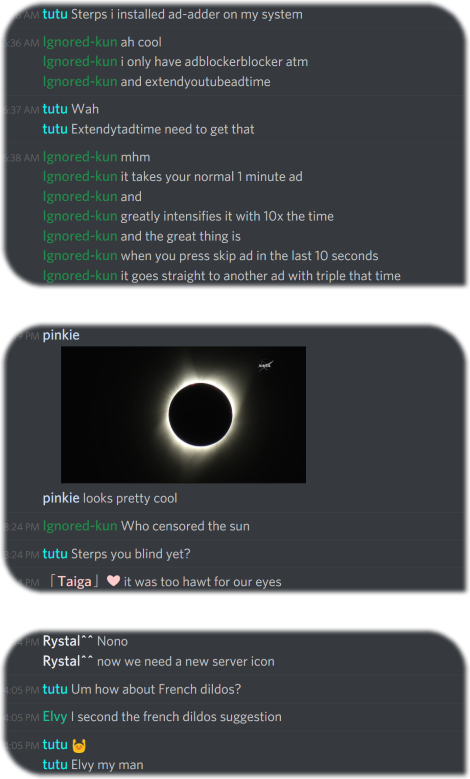 [size=80][b]Congratulations to [url=https://myanimelist.net/profile/Imploze][color=#]Imploze[/url] for being the first one to answer our previous quiz!

Test your knowledge in anime! Who is this character and from which anime?

Answers should be messaged to Sterps. First one to get it and the answer will be announced in next month's newspaper![/b][/size][/color] 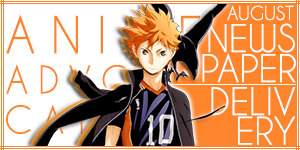 Hope you are enjoying your summer to the fullest, because July is already ending and it's time for another newsletter delivery!(why are you even reading them) The club streams every week on Saturdays (1 PM PST) so don't forget to vote for your preferable movie, blah blah blah - the usual stuff. Anyhow, most Summer 2017 anime came out, so how about a poll? Vote for your favorite seasonal on this forum post. Speaking of the forums, we got another new game!(pun not intended) Check it out here.
★☆★☆★☆★☆★☆★

As time passed by, we realized we should re-evaluate our staff, including discord moderators and admins.
Here are the results for new staff and moderators:

Tuna becomes a Discord Moderator, and has been a reliable addition.
Mari and Pinkie become Recruiters, so look forward for new members.
Taiyakies and Livid become Card Makers, and have already made some LE cards for the club.

Unfortunately, by gaining new staff we have lost some as well. Here are the results for admin and moderator demotions:

TheSlorrow and Kahn are demoted from Discord Moderator positions.
Blixie is demoted from Admin position, but will remain as staff and will be helping out mostly with the newsletter.

This was done to keep you members in touch and things up to date. None of these people left against their own will.
★☆★☆★☆★☆★☆★

We are still looking for people to join us! Recruiter, Card Maker, and Game Maker roles are still vacant.

For more information, and to submit your application, click here. You'll gain a role on Discord if you are accepted.
★☆★☆★☆★☆★☆★

Every while our card makers present limited edition cards, so make sure to watch out for them. Different card editions will be a available each month for a certain time period and can't be taken after that. You may look at our discord announcement channel to find out when they come out.
★☆★☆★☆★☆★☆★

We are mostly active on our discord and during the last month we had many fun conversations. Here is a few of them! 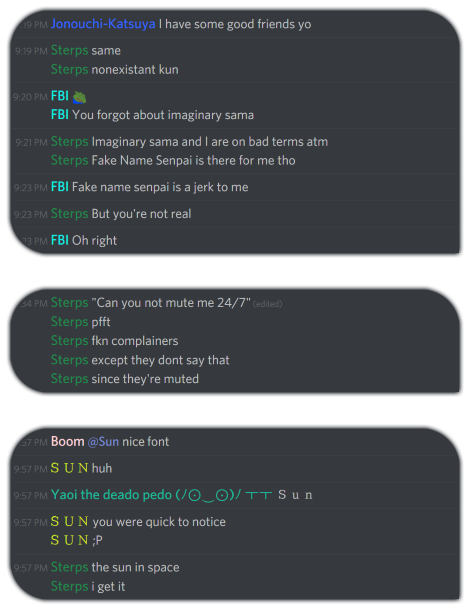 Congratulations to Flower_Hana7788(again?!) for being the first one to answer our previous quiz!

Test your knowledge in anime! Who is this character and from which anime?

Answers should be messaged to Sterps. First one to get it and the answer will be announced in next month's newspaper!
★☆★☆★☆★☆★☆★