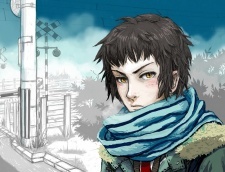 Malfegor Jun 9, 2015 1:20 PM
good to know the series is still good, even after catching up to the books in some parts.

Malfegor Jun 8, 2015 5:15 PM
One could say that he acted like his father would, which in turn may be interpreted as stupid as well. Being good and being smart is definitely not a given in the GoT universe. I dunno man, i still liked Robb. Especially after reading the books and finding out that he planned to de-bastardize Jon.

Well, i certainly hope that they deliver on the dragons. Danny didn't do anything for me for a while now. She just seems like an arrogant asshole nowadays.

Well shit, getting hyped up.
I certainly hope Daenery's stuff is a bit more exciting. There wasn't a whole lot going on the last time.
Also, did Cersei's walk-of-shame happen?

Malfegor Jun 6, 2015 4:12 PM
You're breaking my hearto, Deedee-kun.
The way i see it, it's not really about Robb himself, but about what he represented in the story. Last hope of the North, last force of actually good and not an power corrupted asshole. The last of the Starks that had any influence whatsoever.
Also, i only really started reading the books after the RW, so i did not see it coming. That episode fucked me up good, let me tell ya.
Oh, and i guess the battles of castle black/blackwater are also top contenders for best GoT episoes so far.
And i know the sand snake storyline is not that important, but we still never had any GoT storyline up until now that was outright bad, so that's still new.

Malfegor Jun 6, 2015 3:16 PM
Damn it dude, you're hyping me up real good here. You're greasin me up real oily.
Better than the red wedding?
Ugh, two more weeks of waiting i guess. Tho i heard the sand-snake storyline is absolute garbage.

Malfegor Jun 6, 2015 7:15 AM
I figured that my profile pic would give me away. Still, thought i'd mention it.
Random anime rants and Game of Thrones gushing sounds good enough. I myself am currently waiting for the new season of GoT to end so i can binge watch the entire thing.

Malfegor Jun 4, 2015 2:37 PM
Guess i like my stuff more outlandish. Fantasy, Sci-Fi, Horror, yadda yadda.
Though i'm sure i'll check out Space Brothers at some point, if only to see what the fuzz is about, it'll probably take me a while. I'm currently kinda only going for shorter stuff, both in manga and in anime. Feels like the backlog gets at least a little smaller that way, if i can finish one series per week or something.

Malfegor Jun 3, 2015 2:39 AM
hit me up and tell me your thoughts if you ever get around to watching any of the other Initial D stages.

looking at the list of my favorites, i really don't have a lot of experience with slice-of-life. Vagabond is the closest thing i have to something 'grounded in reality'. I did like Planetes tho, that was also SoL. And related to Space, i guess.
Everything i've seen of Space Brothers (really just random gifs on the internet) makes it look kinda comedic.
fucking backlogs, man. They never seem to get any smaller -.-

Malfegor Jun 1, 2015 11:40 AM
I actually heard that they removed the eurobeat for the most recent part or something. Now that sounds like a sin.
Animation got worse? Shiiit, the character designs were already not were appealing in the first stage haha.

Bakuman is that anime about manga creation, right?
I should probably give that a watch at sometime, considering i plan to draw my own comic/manga at some unknown point in the future.

Malfegor May 30, 2015 11:52 AM
I'm still thinking about checking out more Initial D later on, if only for music and to see how the cg improves, but it's not all too high on my priority list (then again nothing is).
Can you explain how the second stage is worse?
Mad Max was indeed amazing and fun, currently trying to convince my friends to watch it again. It's really a movie that should be watched with loud cinema speakers and after its run we'll never have that opportunity again.

251 chapters, eh? Well, if you like it at least you still have lots to look forward to.
I wish i had 100 chapters of Berserk to read lel
Guess i shouldn't complain, i'm currently unemployed and still don't get an awful lot of reading done. fuckin video gaymes ...
All Comments