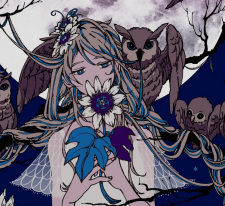 BlackRegis Feb 2, 2014 6:32 PM
drakengards a game on PS2, it follows the tale of a man who lost his parents to an imperial dragon, when he grew up he only wished to kill the imperials and protect his sister, then the imperials downed a dragon and he was mortally wounded, he confronted the dragon with intention to kill but she detested him as much as he detested her, so they came to an agreement and decided to hate the same thing - the imperials and seek nothing but their destruction

I wont say the rest but here's the cutscenes, the tale is very good, and the second game broke my heart, couldn't play it for a month
http://www.youtube.com/watch?v=IBt6RI7MmIQ

BlackRegis Feb 2, 2014 4:38 PM
ah so its a visual novel, i REALLY need to get into those, been puttign off for a while since work bogs me down among other things
i like it though, reminds me of drakengard or monster girl quest, so deep

BlackRegis Feb 2, 2014 3:59 PM
your profile pictures cute, is it from an anime/game? or just something awesome?

zombiepika Dec 10, 2013 5:25 PM
a l r i g h t a l r i g h t igot it, gaawd amazing details, i will try and start this over the weekend after i see the hobbit,
ill probably PM you some questions as far as character design ,cause i do have 2 questions from reading it, very excited to draw this short walk to the inn. ლ(⌒▽⌒ლ)

zombiepika Nov 30, 2013 1:10 PM
ooooh midieval, okay okay ccel this is what you do, give me a paragraph from your scene that you can imagine illustrated into a short comic strip(1-3pages) and ill play around with it, DO IT DO IT DO IT,but this is only if you have to motivation to finish this story...=__= unfinished projects are the worst...

rofl, but i art silly,
what is this work in progress you speak of? o__o


my sword is at your service ＿〆(。。)
do you have any short horror or graphic storys we can start with to see where we stand?( ・◇・)？

Writers and all kinds of artists newsletter

The 4th writers contest is underway and all details can be found here. The contest closes on

29th of August so don’t forget to get your entries in before then. Voting for the contest entries will commence on the 30th of August.

As usual, don’t forget to check out the club page for new stories from our members and don’t be afraid to post stories of your own.

Parisbelle Aug 1, 2013 2:43 PM
Thanks for the newsletter! I'm pretty excited to know that there's a contest~ (:
All Comments