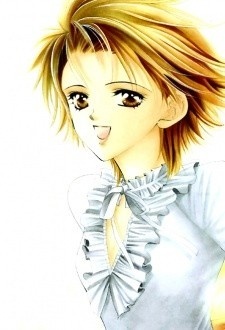 sorry for pm you here since we have problems with MMs

have already invited you xDD
hope you will accept the invitation

Queen2408 Mar 9, 2009 4:50 PM
Ohh I thought you werent gonna answer XD. Well yeah, she is kind of unique...Sunako is great but she has an inferiority complex that makes her really different, thats the only thing I dont really like about her. Have you read The Prince's Cactus? I think I found only 4 chapters but the girl is great, the same goes for the main in happy hustle high...(I dont remember their names 'cause they are short mangas) Hmmm well, I dont remember many heroines that arent stupid and blushing all over, but there is Ichihara Yuuko (she is so funny and powerful) and Kirihara Misaki from Darker than black..(she is cool). And you should know Moko-san hahahah, I havent seen her in a while..

Oh that movie...I actually dont remember anything about it besides the artwork...I just remember I thought: this is it? what is this crap?. Maybe I forgot everything because it was no use in remembering it..
After some years I watched the other movie and I liked it..well Im not a FF fan, I have played only a game, without finishing it...but it was cool.

ishitagupta Feb 22, 2009 12:10 AM
Hmm, oh ... I believe it's already been released in good ol Japan in late January and a couple of lucky souls have read it already. Sadly no scanlation yet. Maybe the english version comes out in March. I hope people move quickly and upload it already!

ishitagupta Feb 21, 2009 4:17 PM
So I'm guessing you've read Enkoi Debut considering you've reviewed it. Can you please tell me the premise of the whole story and what kind of time span it lasts for our characters. Thanks!

induce Feb 14, 2009 4:01 PM
I see. So you were really at the point where you noticed yourself? I mean, of course you'd notice being overly sad, crying and shit but sometimes you don't understand the severity of it all. It does sound like you made the right decision though. Was there anything in particular that triggered it for you?

I got in touch with a doctor that told me that I had to treat it just like a broken arm or a broken leg, which meant cutting down on things I had to do. I then moved home to my parents again so I got close to some persons who really cared for me. It probably took a month or so before I'd wound down. I could wake up all anxious and not daring to go back to sleep for instance. Was horrible. It gradually got better though, probably thanks to listening to my body and taking it easy as well as getting my confidence back up.

It is! Especially for a girl I think, but maybe it's a regular thing for self defense. Did you go yourself or do you go with a friend or two? I doubt I'd dare doing something like that. I'm not one who tries out new things really. Is indeed something good though, to work out. I should get a hobby or something that involves exercising as well. It's been a while since I last did. As for my unique hobbies, I dunno. I'm pretty into motorsports and that is pretty rare around here. I just watch it, I'm not involved in it myself. Otherwise I'm pretty average I think, with a slight lean towards the geek side.

Yeah it'll be interesting to see how much my cat calms down when she gets older. Now she's about 9 months old so still very playful. It's cool that your cat managed to adapt to the situation though, I mean they can get really attached to some persons. And wow, seven hours >_< You moved quite a distance there..

induce Feb 5, 2009 1:07 AM
Really? It seems that this is more frequent than I thought. Maybe it's hard to see because it's not something you really want to make the public aware of. I guess many suffer in silence. How did you deal with it and how far did it have to go for you to realize that something was wrong?

Skip Beat is indeed great. The last two episodes were really good. I really like how Ren and Kyoko are getting closer to each other. It's so funny that he refuses to admit that he's warmed up to her, haha. There are many life lessons in that show. For instance in one of the last episodes where she realized when looking at another girl that that was exactly the way she had behaved in the past without realizing that she were consumed by another person to that degree. I think even though it's a hilarious show sometimes many of us would have an easy time relating to many of the situations and feelings in it.

Ohh, kickboxing, huh? There you go. Told you that Canadians were crazy. You would probably scream molester before I even had the chance to approach you and then knock me out cold in an instant, haha. How come you took up that sport? I think you'd really appreciate HnI anyway. It's an awesome series that everyone should give a chance.

Yeah I see what you mean. My cat is kind of a mix between a dog and a cat. She's kinda independent yet she's also an attention whore and playful. So I guess I got the best of both worlds. It's too bad that you had to leave your kitty partner behind >_< If you ask me most cats should be able to enjoy the outdoors and that is also a dilemma I'm bothered by now. I should let her go outside because she has so much energy but there are also so many cars here and yeah. I'm in an apartment house too so she can't get back inside easily. Do you live close to your parents so you at least can visit her sometimes?

Gaia Feb 2, 2009 2:04 PM
Hey, sorry for the late reply. Hmm, true true. Some of the characters were ok in Clannad, not all were really that annoying, but the storyline was also kinda.....bleh. Anyway, I'm pretty sure we both understand each others views on it by now lol.

That is quite the unusual degree, I've heard of religious studies though. But that would be moreso the history of all religions, etc. I guess that means you're a Christian? Looking more into your own religion, or just something that interests you? Or all the above? XD. Five years is quite the journey though, good luck for the rest of the way!

Yea, I took community college. I studied programming at my first college, but got removed from the program during my second year due to personal reasons. I enrolled into another college and took a Computer Service Technician class for about a year. I wouldn't mind going back to take another course, or re-try the programming one. It's always fun to learn something new. Reason I got into computers, since they are always changing, so you basically learn something new every day :).

I just work now lol. Do you work part-time? This will probably sound ignorant, but I'm not quite sure what kind of work Theologists do? XD.

induce Jan 31, 2009 1:50 AM
No problem, take your time. Did you manage to be diligent and study properly? :P You should take some time off. Eventually you have to whether you like it or not. I remember back in winter 2007 when I was on the verge of being completely torn apart by stress. Even if I wanted to work on my report I got nothing at all done. I just couldn't write anything, completely blocked. Kinda scary when I think back to it. So yeah, important to rest up and relax from work and studies sometime :-)

Not much. This week I've mostly watched anime and played GTA IV for the Xbox 360. Trying to finish that game and also finish watching Eureka Seven. Hopefully I'll be done by tomorrow or the day after that. My final year project officially starts on Monday so yeah, guess I have to get the illusion of joys in my life out of my head for some time now ^_^;; That said I'm going to pick up Ergo Proxy with a friend later on, apart from that I'm following a few new series and some from the old winter season. You can see in my list if you're curious. I'm stoked about the new Hajime no Ippo season. Gundam 00 is also very good. New ending owns <3 What about you?

Good question. I've never had a cat until now. We've had a dog before in our family but this cat is all mine. I like both dogs and cats actually. The way dogs are so devoted to their masters, it's very sweet. My cat is very social and playful though so I love having her around. Couldn't imagined a better first pet for myself. Makes living alone in this apartment a lot less lonely :-) And you?

Gaia Jan 27, 2009 4:48 PM
Ah, I see ^_^. Oh well haha. I just found it much too slow paced of a series. I don't mind some shoujo series, but clannad just didn't seem to have anything really......"special" about it...perhaps other than the robot thingy, but that wasn't really brought up much in the anime itself. Well...it may of been brought up in the later episodes, but I kind of skipped through those :P.

Btw, what are you taking in college? Are you almost finished, or just starting?