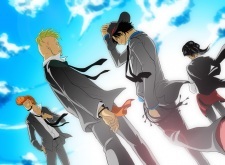 PyraXadon Mar 20, 2015 12:00 PM
I have talked to some people that have given it low scores, and for the most part, it's the fact that the series isn't as good as some old anime classics. While I find that to be unfair to a newer series strictly because of the age difference, it's just their opinion, so I don't really get angry over that.

The first three points just seem like people nitpicking over little details, with the show not adhering to their tastes. The internal dialogue is mostly represented for symbolism, the comedy can be a bit mood-killing sometimes, admittedly, but the repetitive too many performances? That's just downright trolling for an anime that is about music competitions.

_juno Mar 19, 2015 12:36 PM
I still like the show, I cried a lot in the final episode today, btw.
The history was touching, indeed.
I gave 7, not just because of the negatives that I pointed. The 7 its based on my own list (the way I use to score the shows and stuff).
But of course that the negatives in some way made me score it 7/10.
That depends in the way that bad point affects you.
Affected me a lot, I have to confess. But it's my opinion

Saeedpoppa May 2, 2014 7:38 PM
I don't think I'd ever understand why people love Sword Art Online so much.
All Comments