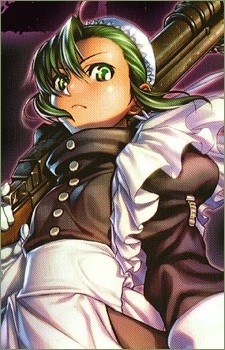 Who is that character on your profile picture?

Ffwah Jun 7, 2011 9:20 PM
Really? What about the manga is different? I saw Elfen Lied and rated it low because some elements seemed... unnecessary. Like the cousins and their romance.

Also, thanks for the recommendation! It's hard to find really good psychological anime/manga. :D

Riptos May 27, 2011 6:34 AM
Automatically I am going to say yes on a friend request there. I like reading messages that are honest and to the point. To counter your points as you have stated them.

1. The School/Harem stuff: I like it, it's been something I started watching almost from the first anime. Don't get me wrong I love the Guns and Action stuff with magic as well. (Black Lagoon and Hellsing being prime examples of this) I just tend to gravitate towards the same type of genre as I cant really go too far wrong with that.

2. I only recently found out I liked it, I even said the reason why, Kodomo no Jikan is such a bad anime in some ways but great in others. It's really quite ballsy and I respect the animation studio that had the guts to air it. I would watch similar stuff to it as well as it does the production credit then. Thanks for the open minded comment, im not generally a hater and will give most things a chance, hell I even gave K-ON a chance, I dragged myself through the whole first season because of how "good" it supposedly was.

TTGL, an interesting subject for me, I liked Yoko, I really did in fact. But the other characters did nothing for me, it felt more like Naruto with Mechas which I cant stand (The former not the latter, after all Geass is awesome =P). I doubt I will repick it up but maybe when I run out of things to watch I may pick it back up. I have been wrong in the past, Shuffle being the best example, I loved that after I picked it back up.

Thank you for the positive comments with regards to my list. Took quite a bit of time to get it all filled out and I like to think I can get an opinion across to help people know how I felt about something quickly. After all I have alot of 7's and 8's on my list and it helps letting people know why I gave it that.

Yep hate Mio, always will. The most useless bag of moe on the whole anime planet yet people adore her...I will never understand that at all.

Taiga, well whats not to love, she is a Tsundere that truly changes over the course of her series and thats why I adore her. Other Rie Tsunderes like Louise and Nagi dont really change at all throughout the course of their series' and that makes them average to me.

Sorry for the long winded reply but I felt that it was worth that. =)

the manga is fucking amazing.. its way more different than bleach/naruto.. it has bigger plot, amazing character development and awesome story..

and its not a generic shounen.. its out of teh 'generic crap not killing any character' stuff...
try it, you wont regret it