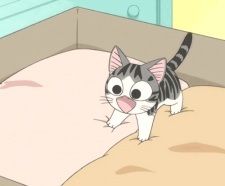 Haha thanks, your the first person that compliments me for watching controversial anime's. I don't write reviews, because I don't really like too, but If some wants my opinion about a controversial anime, and not just it's gross or they crossed a line they shouldn't have, I will happily write one.

I havent heard of any of those, they all have good mean scores I see. Wat kind of anime's do you enjoy most? :o

Yeah maybe I should, but I'm gonna read it, maybe during my vacation :)

jungsae Apr 21, 2019 4:49 AM
Yeah after I read the book I was amazed how they picked the original source and actually adapted it almost literally word by word. Well, in director's cut, that is. When I first watched theatrical version (before the book) I was pretty confused in some places since it skips lots of stuff and it's quite noticeable.

Oh I have absolutely no memory about what title it had, sadly. It's been a long time. But if you read his books anytime soon tell me what you think of them. I'm a huge fan of Murakami and I'm always curious to know what people think of him (even if it's negative).

Yeah sure, he's from this manga. I just thought I'd first make sure if you're ok with BL cause, you know, it's not everyone's cup of tea.

Happy Easter :) We do celebrate it here :) Where are you from btw?

jungsae Apr 17, 2019 6:18 PM
Hehe yes I get it that you're not trying to convince me, and I'm actually enjoying reading your thoughts because it's not a common luck to meet someone who sincerely cares about books :)

Hmm, i think it's Lord of the rings. It's a really gorgeous trilogy, and it adapts the book perfectly. Being honest, I actually like LotR movies way more than the book.
As for let downs ... first thing that pops up in mind is a movie based on Murakami Haruki book. Don't remember which exactly, but that was when i thought that it's probably impossible to adapt his books into movies, since his stories by most part are not focused on plot, but let reader dive into character's inner world, and heavily loaded with personal feelings, thoughts and inner monologues. It's not something to convey through visual medium imo

I'm not sure which character you're asking about, if it's the previous one that you've mentioned, then it was Genos from One Punch Man. If the current one, he's a character from a BL manga which idk if you would be interested in

Well I'm currently watching My Sister, My Writer. A controversial anime with low mean score. I like watching controversial anime's, so I wanted to see if the anime is really as bad as the score suggest, Or if people just couldn't deal with the controversially. So far I can say It's indeed not really good just a average anime filled with only anime clichés. The mean grade it gets right now is a bit to low, but it's not much more that a 6 or 6,5.

As for manga I'm not much of a reader, I plan on starting with Sankarea soon, but I still have to find motivation somewhere :)

How about you? what are you enjoying?

jungsae Apr 4, 2019 2:23 AM
No worries c:
I'm totally agree with you.
Although the decisive factor for me is that i just can't get into reading without feeling the paper in my fingers. I like the very sensation of turning physical pages, and the smell of fresh print, or old paper. It's just something ebooks can't replace with all their practicality, even though I think they're great and useful.

Haha, yeah i like it too, thanks to the artist :)

jungsae Mar 24, 2019 11:44 AM
Joe Abercombie is the author, "The first law" is a book trilogy. It's dark fantasy. i like dark fantasy as well, and i heard it's pretty acclaimed work in its genre, but tbh, so far I can't really see where all the praise comes from. Have you read Asimov btw?
Alright, thanks for recs, i'll keep those in mind if I ever see them in a book store. i still prefer paper books, how about you?

Haha, but you know, reading manga has one downside. Since i got into it I started getting real salty over bad anime adaptations pretty often :D

jungsae Mar 22, 2019 5:31 AM
woah, I've never heard about any of those :) I'm a slow reader too. Been trying to finish Abercrombie's The First Law for quite a while, still on the first book lol. Oh, but I got interested in mythology last year, thanks to a certain game and certain anime, so sometimes I read that also. Couple japanese LNs as well.
Yup, and it's also pretty hard to get people into manga, even when recommend them stuff they would most likely enjoy. Reading itself seems to be a problem. I'm totally cool with that too, but sometimes i get upset over bad adaptations and the fact that most people will only see that adaptation, indeed, and not the source.
Gokushufudou is funny btw. I saw you have it in your PTR, you wont be disappointed (probably) :)

Greyleaf Mar 21, 2019 3:52 PM
No worries; even if you hate it, I'm totally indifferent to others' tastes. It's all subjective after all, so you can tell me either way and I won't hold anything against you, lol

I hope you do enjoy it, though! :D

jungsae Mar 21, 2019 12:21 PM
Your nickname implies you like reading, so I guess books in general :) That's nice tho! I'm not so all-rounded, i somehow stick to sci-fi since childhood and up until now. Meanwhile I also like Murakami Haruki a lot. Though I haven't finished anything last 3 or 4 years since I've read Battle Fairy Yukikaze series and liked it so much it gave me massive reader's block and have no idea how to break out of it :D
As for manga, I don't have clear idea either. I like darker stuff, but at the same time I'm always down for some josei eyecandy, and at the same time I had a lot of fun reading some battle shounen-ish titles..
Anyways, it's cool to meet a fellow reader! Especially on this site :)