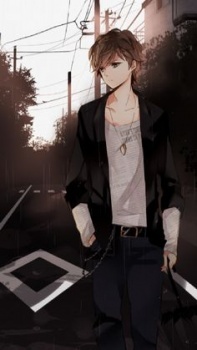 Your latest collage of Dr.Stone is OP.. <3

Yuu's jealousy kicks in again Aoi really needs to make things clear cause if she keeps the encounters with this guy as a mystery we will eventually see Kimi no Iru Machi type dumb drama Aoi going to date this guy & yuu some1 else & in the end they cause 2 heartbreaks, if Seo pulls another Kimi no Iru Machi here i curse him :D

Sugram22 Jan 1, 2018 4:01 AM
Tokyo Ravens is quite good anime gets better on later, but even start is good, it does have slight romance to but its not the main focus this focuses more on the plot also a lot of blotting( & there is combat, MC is High School guy, not sure how to explain more without spoilers :D

Sugram22 Dec 7, 2017 8:15 AM
Zero kara Hajimeru Mahou no Sho was interesting anime MC is forgot how it was called in some anime's its beast race & White tiger with 2H sword hates witches but ends up being ones guard & she sleeps on him he is large & furry (she says hes a comfortable bed) he bakes up & gets red cheeks & asks what do u think ur doing, she looks like she is Emilia sister from Re:Zero kara Hajimeru Isekai Seikatsu if she had one but personality is totally different she flirts (some would say teasing but it was clear she was serious) with him often but he doesn't get her feelings, well she started to like him quite early it showed despise hating witches she so hes kind & warm side & then it went deeper & deeper & by the end she totally loved him but cause its not romance anime it won't show much she doesn't act on her emotions as much woman in romance anime's its focused on other stuff, in one city in entrance he shows hes papers & guard asks who is she the Excuse she came up with fast almost killed me & he had a dumb face, to be honest even i would be pissed in hes shoes but if i am side char i would laugh to death what almost happened i mean the death part

Sugram22 Nov 22, 2017 1:23 AM
this guys are 5th graders its clip of a funny part, what they made her say XD
https://www.youtube.com/watch?v=TKjnzQlNh08
kids are scary sometimes with their logic
i so it dub

its from Hatsukoi Monster

Sugram22 Nov 19, 2017 3:23 AM
just started watching ReLIFE funny romcom guy 28 quit job cause he didn't like it & wanted to try another & didn't get it so he meets a guy who looks like highschooler & he says he works on relife project its a experiment & gives hi a pill that makes him younger & then hes sent to high school 3th grade first ep was already good & hilarious i wonder whats next

jeffu Nov 18, 2017 4:54 PM
it all started in high school where a friend's friend was looking to educate the masses of the hot thing called anime at the time and i guess i was the only one who took interest in it and after long explanation that the series we watched on tv like dbz,sailor moon,one piece were anime and that there were many others out there

jeffu Nov 18, 2017 10:41 AM
spreading the animu/manga love is always a nice thing especially if it's a family thing bringing siblings together lol

imagine she gave you the anime discs instead of the manga boy what a fun ride to hating everything related to sdk and anime of that period of time it would be!!!