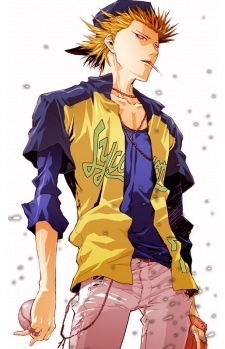 DooMWhite Apr 25, 2019 12:05 AM
If you like romance and mystery I would REALLY suggest Detective Conan, you just need to skip the fillers and you're good to go.
Unfortunately the start of the anime was a bit slow cuz the producers thought the anime would just last 50 episodes, so they cut a lot of actual cannon parts on the episodes to just silly stuff, but after that it's get a lot serious.
Episode 345 is just too fucking good(qualitywise) and bad for weak hearts :P.
And the movies are really good and unique(they usually don't just focus on the case, but on something else).

i am trying to figure out the immense fun u get by adding ":3"

AbidRants Mar 23, 2017 6:55 AM
thanks for saving me from becoming friends with a lame guy.kindness still exists in humanity,i see.for that,u may have my gratitude. :D

btw adding ":3" to every single sentence must be really cool.I think it is a clear indication that the user has a very high level of intelligence and creativity. must be real fun.

it must've required a high level of creativity to come up with that ,no? im really entertained

men with your "talent" and "humour" should host stand up comedies or late nights rather than rotting in this site. ":3"

darkfeatherX Dec 24, 2016 3:13 AM
Nope in both cases I picked up the manga after watching the anime.

darkfeatherX Dec 21, 2016 7:35 PM
Both Gangsta and Elfen Lied are ultraviolent, immature romps surrounding itself in gore, shock value and violence.

Just one problem.
The manga are not like that.

Here's the thing, Elfen Lied is a very intelligent manga, with quite a few ideas concerning how people deal with epidemics, human experimentation and how various mental illnesses can stem from trauma. And it culminates into an apocalyptic horrorshow.
The anime brought out none of the things. It was both disappointing and mediocre. The only positive thing I can say about the anime is OP.

Gangsta is just a massive trainwreck. They tried to pick up projects that are unique but almost never managed to pull through. The first few episodes are amazing, then it progressively gets worse and culminates into one of the worst endings ever.

Also, YOI is not as good as ping pong. But it's better than Haikyuu and KNB imo.