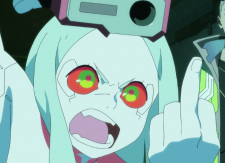 ERMAHGERD1920 Dec 19, 2019 9:29 PM
Yea, thanks for a detailed reply. I guess my problem with the show wasn’t really the timing of the comedy, I dropped it pretty early so there wasn’t too much tension, but more so the comedy itself. I’m not trying to sound like an edgelord, I do enjoy comedy in story-telling but when most of your comedy comes dumb facial expression or loud reactions, I just have to question how young the writers think the viewers have to be to laugh at these sort of things. I see these jokes as a cheap attempt to get a laugh out of viewers which completely ruins the show for me. Which is why I wasn’t sure which type of humour is used in Haikyuu, though it seems to be the one I dislike rather than well-thought out jokes with good execution. Again, thanks for the reply.

ERMAHGERD1920 Dec 19, 2019 5:10 AM
Read on a forum post that you dropped Demon Slayer due to its frustrating use of humour, I pretty much had the same experience. Noticed you're watching Haikyuu! tho and wanted to ask if it suffers from the same problem?

sumony Oct 28, 2019 11:43 AM
Hey! I thought I would send you a friend request since we have a SUPER HIGH AFFINITY! Haha
All Comments