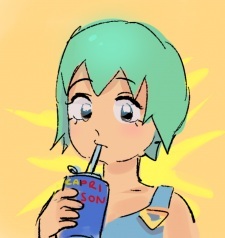 -Bungee_Gum Jun 23, 1:23 AM
No problem! I always appreciate a good ol' customized list

what-is-animu Apr 18, 1:38 AM
dw I just appreciate a person of culture that understands that 6/10 is a positive score

sorcery Mar 6, 4:58 PM
> Never thought about the parallels to Boogiepop Phantom, but I can see how its character arcs and eerie aesthetics can be similar to St. Luminous.

I put them in parallel as they have polar opposite approach, despite sharing similarities. Boogiepop phantom has a claustrophobic atmosphere, either capturing nostalgic stillness through sepia filter or have the dark photography highlights a purposely dull scenery, only made lively by ethereal glows guiding the supernatural action. Artistically, SLJ has more of a colorful palette design, the bulk of what is fearsome or depressing being prefigured by the cryptic script rather than atmosphere, as it outlines subjects in regard to coming of age angst. BP has evil supernatural beings preying on the livings, they seem to be lurking everywhere... Whereas SLJ has a vaguely ominous and yet non malicious force, subjecting to an ordeal the ones still walking his path.

sorcery Mar 6, 4:41 PM
Shinkai Densetsu Meremanoid had DVD prints? Never saw any during my research, only VHS boxset or by unity. Nhm, perhaps it was a thing, but at very limited number of copies.
Never heard of Space Pirate Mito, on the other hand. How about it?

sorcery Mar 5, 2:30 PM
I know very little, since I can't look for leads in a language I don't fully master. From what I understand, the creator of the show, Kenji Terada (you perhaps know as the script writer of Kimagure Orange Road and the writer of the first three final fantasy games) was contracted to act as a bridge between Triangle Staff and a Korean company called Xing Entertainment. The latter were looking for new video game ideas and somehow turned to him for help. SLJ came first, and then a Playstation 1 game was released, looking nothing like the source. Xing and Terada joined effort again on a project called "Shinkai Densetsu Meremanoid". This is an obscure but intriguing collaboration I have been trying to rally people around. The anime was distributed and dubbed in Italy, but nowhere else in the world...
I have the raws in relatively good quality, given that there is only VHS rips in circulation. It's a critically endangered anime which was never the object of a DVD reprint. I'd sub it myself if I knew Italian, but I only have poor basics at it.

sorcery Mar 4, 2:19 PM
I found your assessment about Saint Luminous Jogakuin to be very enlightening. Yes, as a mystery show, it is very far to be as convincing as something like Boogiepop Phantom. If you compare the two shows, SLJ utilizes the Mystery elements to emphasize the character study and philosophical commentary, whereas BP isn't as focused on these, as these motifs are used to build up a Paranormal Fantasy framework instead.

RogerSmith2004 Oct 17, 2019 5:59 AM
It's a very important series to me. I may write about it sometime. I wrote about it in Chris Stuckmann's book last year but something more in depth might be of greater interest.

Pemulis Aug 30, 2018 8:47 PM
I thought it was excellent. Other than the slowish start, I don’t have many serious complaints about it. It’s definitely my favorite JoJo part up to this point.
Have you read any of JoJolion? I’ve heard good things about it, but I’m a bit hesitant to start since it’s still running.
All Comments